Column: Georgia can't be top dog until it conquers the Tide 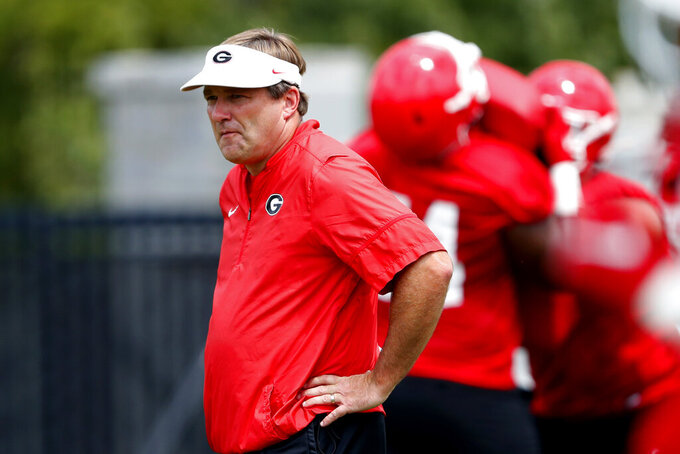 ATHENS, Ga. (AP) — If you're looking for a terser-than-usual response from Kirby Smart, just bring up how the last two seasons ended.

The Georgia coach will shoot you a steely eyed glare that falls somewhere between disgust and disdain, then respond with a banal cliche that makes it clear you're just wasting everyone's time even broaching the subject.

"We are looking forward," Smart said Friday, when that all-too-familiar question was raised again as the Bulldogs began practicing for another season of lofty expectations. "We are excited about this year."

No doubt, Georgia has plenty of reasons to be excited.

In just three short seasons, Smart has molded the Bulldogs into one of the nation's elite college football programs, turning his dynamic recruiting touch into a seat at the table alongside the handful of schools that can be counted on to annually contend for a national title.

But there's still one big roadblock standing in the way.

That albatross to the west.

The teams met two years ago in the national championships game. Last year, they clashed with the Southeastern Conference title and a trip to the College Football Playoff on the line.

Both times, Georgia had a program-defining victory in its grasp.

Both times, Alabama managed to wiggle away.

As much as Smart and his thoroughly indoctrinated players prefer to avoid the subject — and, yes, their answers Friday fell right in line with their coach's — this is a mountain that must be conquered before the Dawgs can climb on toward the biggest prize of all.

As long as Alabama sits atop the SEC, Georgia can't be the top dog anywhere.

"We've got to finish better, first and foremost," said D'Andre Swift, a dynamic running back who figures to get plenty of attention as a possible Heisman Trophy candidate. "It's the little things — focusing on special teams more, stuff like that. It's the little things we can always do better at."

No doubt, these sort of setbacks can mess with your head.

Just ask the Buffalo Bills, who kicked away four straight Super Bowls. Or the Atlanta Braves, who won all those division titles but kept finding ways to blow it in the playoffs.

While it's too soon to call this the Saban Curse, it's on the verge of festering into more than a minor wound for those between the hedges.

Not that they'll admit it.

"The past is the past," said quarterback Jake Fromm, doing a spot-on impression of his head coach, who worked for Saban before taking over at Georgia. "We're focused on the future. Today is about the first day of camp and how we can succeed at that."

Georgia actually won the SEC title in 2017 and made it all the way to the national title game, only to find Alabama standing in the way. Even more galling: The Tide didn't even win its own division that year, knocked out by a loss to Auburn in the regular-season finale but still good enough to receive an invite to the four-team national playoff.

Of course, we all know what happened next.

The Bulldogs built a 13-0 halftime lead over Alabama in the title game, prompting Saban to switch quarterbacks from Jalen Hurts to Tua Tagovailoa, who sparked a comeback that sent the game to overtime. Georgia went back ahead with a field goal, and then sacked Tagovailoa to set up second-and-26. The freshman responded with a 41-yard pass to DeVonta Smith, who broke free behind a botched coverage to haul in the championship-clinching touchdown.

Last December, the teams met again in the SEC title game with a spot in the College Football Playoff on the line.

Again, it was Georgia grabbing the lead. Again, it was Alabama making a quarterback switch, this time turning to Hurts after Tagovailoa was injured. In the end, it was another excruciating ending for the Bulldogs, who gave up a tying touchdown pass with just over 5 minutes remaining, were stuffed on a ludicrous attempt at a fake punt around midfield, and gave up a 15-yard touchdown run to Hurts with 1:04 remaining to seal a 35-28 defeat.

"There's nothing we can do about it now," said linebacker Monty Rice, shrugging his shoulders. "If we're crying about it now, what's it going to change? We lost."

In a blatant attempt to spin the past into a forward-looking question, Smart was asked if those two defeats can be used as motivation.

Or, at the very least, provide some sort of lessons that can be applied to the upcoming season.

"I don't think so," Smart said, before contradicting himself in a way. "How we finish is important. You learn from that. You learn from that in the offseason. We learn that from the day we get back from those games and we start our workouts and we emphasize 'dog time,' which for us is the fourth quarter all the time."

"You learn from your mistakes," Smart said, flashing that look, "but you don't dwell on them."

Paul Newberry is a sports columnist for The Associated Press. Write to him at pnewberry@ap.org or at www.twitter.com/pnewberry1963 His work can be found at https://apnews.com/search/paulnewberry