Column: Virus will make the timeline for sports, too 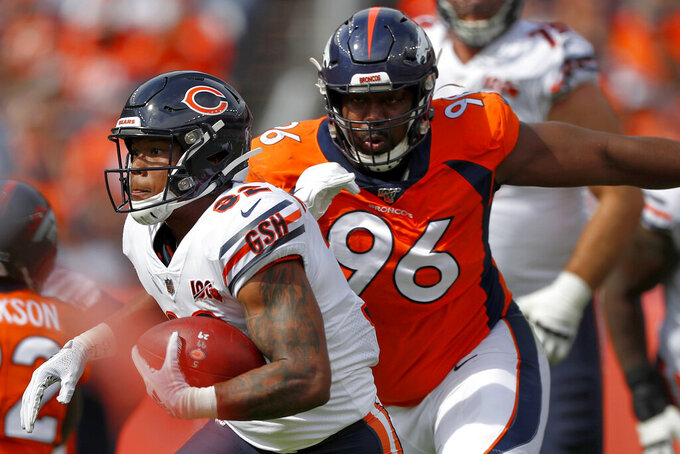 FILE - In this Sept. 15, 2019, file photo, Chicago Bears running back David Montgomery (32) is pursued by Denver Broncos defensive tackle Shelby Harris (96) during the first half of an NFL football game in Denver. The coronavirus pandemic has forced NFL teams to make free agent decisions without the benefit of meeting players face to face. That suppressed the market for plenty of lower-tier free agents such as Harris who signed a one-year deal for $2.5 million with a chance to earn another $750,000. (AP Photo/David Zalubowski, File)

The unthinkable, at least for sports fans, already has happened.

The games, as we know them, are shut down. We’ll never know if San Diego State was a Final Four contender or if Tiger Woods would have defended his green jacket at the Masters.

There was no opening day in baseball. The odds are increasingly good there will be no Stanley Cup Final or NBA champion in the year 2020.

And now it’s time to consider the unimaginable, at least when it comes to fun and games as we once knew them.

That means no college football this fall. No Super Bowl next February.

No sports at all as long as the new coronavirus keeps killing people across the country.

Presumably, the commissioners of this country’s major sports leagues already know that. They understand the kind of things — immediate widespread testing tops the list — that would have to happen to allow play to begin again.

If not, a brief review of what the chief medical officer of the NFL told Barry Wilner of The Associated Press is in order.

Read between the lines — actually, just read the lines — and the prospects of an NFL season later this year seem bleak, no matter how much the president of the United States would like to see sports come back quickly.

“We have got to get a much better handle on the actual spread of this virus and how many new cases there are,” said Dr. Allen Sills, a neurosurgeon who has been with the NFL since 2017. “How it is transmitted and how we can mitigate it. We have to get to the point that when someone is tested as positive to the virus that does not mean an immediate quarantine. If that is the case, you can’t think about opening up a team sport.”

That is not how President Donald Trump sees it. He convened a conference call of major sports leaders on Saturday to give them a pep talk on sports coming back and indicated he would like to see it happen by September which, not coincidentally, is the scheduled start of the NFL season.

“I want fans back in the arenas,” Trump said later in a briefing at the White House. “I think it’s ... whenever we’re ready. As soon as we can, obviously. And the fans want to be back, too. They want to see basketball and baseball and football and hockey. They want to see their sports."

On that, most everyone can agree, no matter their political persuasion. Sports offers a pleasant diversion in ordinary life, and it becomes even more important during a time of crisis.

It’s why baseball continued during World War II. It’s why the NFL played two days after President John F. Kennedy was assassinated and why both Major League Baseball and the NFL rushed to get back on the field in the wake of the terrorist attacks of 9/11.

The new coronavirus, though, is as sneaky as it is deadly. Even experts have a hard time figuring out the different ways it spreads and how to protect against it.

And no amount of banging on the bully pulpit is going to stop it from coming to a stadium or arena nearest you.

Imagine going to a NFL game in September. Do they scan your forehead when they scan your ticket? Will you have to present evidence of a negative virus test? Do you really want to sit next to a stranger and worry for three hours about what he or she might be carrying?

The beer lines would be scary and waiting to use the urinal even more frightening.

Indeed, the logistics of simply holding a game would be staggering. And playing in one might be a risk that even NFL players won’t want to take.

And if someone tests positive, then what? Do you cancel the game? The season? Does an entire team go into quarantine just as the playoffs near?

There’s too much that isn’t known to even take the risk. And in California, where three NFL teams play and a new $5 billion stadium is nearing completion in Los Angeles, Gov. Gavin Newsom is already on the record as expressing skepticism the season will open on time.

“I’m not anticipating that happening in this state," Newsom said.

A statement like that would have been unthinkable just a month or so ago. But as the death count rises, the idea of an NFL season this year will seem even more fanciful a month from now.

The virus will make the timeline, as Dr. Anthony Fauci, the U.S. government’s foremost infection disease expert, has been saying to anyone who will listen.