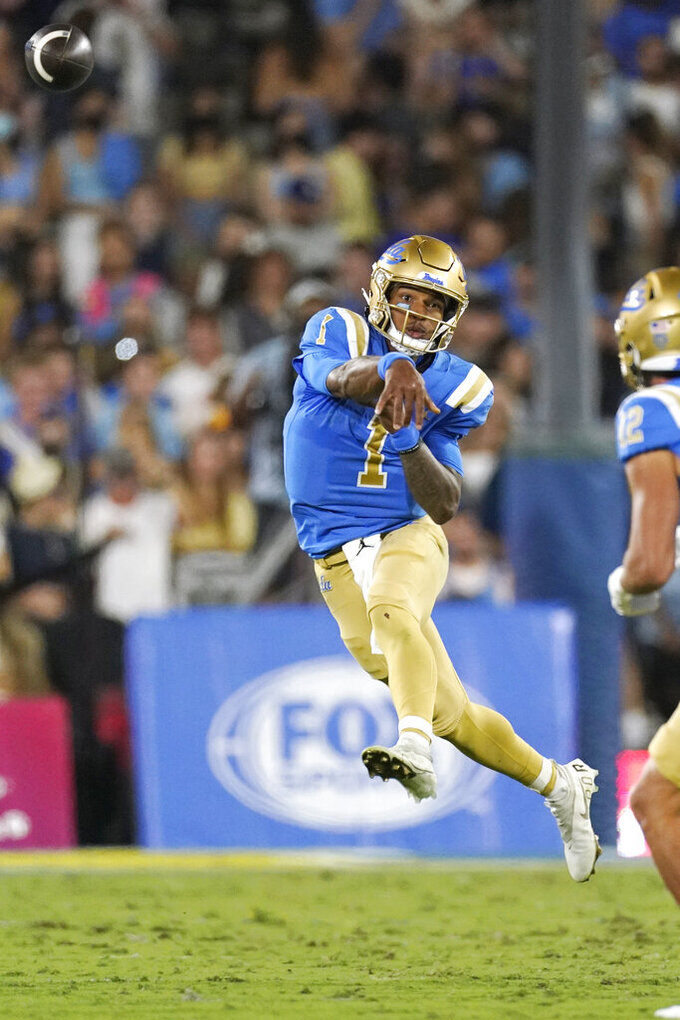 PASADENA, Calif. (AP) — Arizona State relied on its rushing attack in its first four games. Jayden Daniels and the passing game propelled the Sun Devils to an upset win over No. 20 UCLA on Saturday night.

Daniels passed for 286 yards and threw two touchdown passes to Ricky Pearsall, and Arizona State used big plays in a convincing 42-23 victory at the Rose Bowl.

"They’re going to try to press you and get you in those long downs. So really the game plan was to get the ball in my hands, max protect and take shots and we did that,” said Daniels, who completed 13 of 18 passes.

"Coming into this, he was a little emotional. I hugged him in the locker room and told him his spirit is in the stadium. His spirit is here, looking at you, watching you. And I thought he went out and really played well,” Edwards said.

The Sun Devils (4-1, 2-0 Pac-12) were forced to punt on their first drive before scoring on their next five to take control of the game and likely the Pac-12's South Division.

Four of Daniels’ completions went for 47 or more yards. Two of them were touchdowns to Pearsall in the second quarter — a 65-yard yard screen that tied it at 14 followed by a 54-yard reception where the junior beat Elisha Guidry in coverage to give Arizona State a 24-20 lead. Pearsall finished with 132 yards on four catches.

“We have to be responsible on each level of the ball. When we pressure and send seven instead of eight, we have to get home," UCLA linebacker Jordan Genmark Heath said. "We put our DB’s in compromised positions. As you know, it’s hard to cover especially good receivers like that when they get in the open field. We just have to do our jobs in all facets.”

Rachaad White rushed for two TDs, including a 49-yard score early in the third quarter to extend Arizona State's lead to 32-23 after the 2-point conversion.

“I thought we kept them off balance a little bit with the run and the pass, and there were a few things that we thought we could attack them with. And, again, sometimes you don’t hit those and it changes the game," Arizona State offensive coordinator Zak Hill said. "We were able to hit some of those, and I give credit to the guys.”

The Sun Devils' defense also came up with a big play early in the fourth quarter when it stopped UCLA quarterback Dorian Thompson-Robinson on a run option for a 1-yard loss on fourth-and-goal from the ASU 2.

Thompson-Robinson accounted for 328 yards. The junior was 21 of 32 for 235 yards passing along with 93 yards rushing on 18 carries. Kyle Philips had a TD catch for the fourth straight game and tight end Greg Dulcich had nine receptions for 136 yards for the Bruins (3-2, 1-1).

“We played really well on offense in the first half. Did not play well in the second half,” coach Chip Kelly said.

After the teams traded field goals in the first quarter, the Sun Devils and Bruins combined for 41 points in the second. Arizona State led 24-23 at halftime.

Thompson-Robinson connected with Philips for a 3-yard touchdown on the first play of the quarter to give the Bruins a 10-3 lead. The Sun Devils tied it on the ensuing possession when DeaMonte Trayanum went around left end to score from 6 yards out.

Arizona State appeared as if it was going to go into halftime with a four-point lead, but D.J. Taylor fumbled a punt at the ASU 8, which was recovered by Kain Medrano. Barr-Mira split the uprights from 26 yards on the final play of the first half for his third field goal of the half and get the Bruins within 24-23.

Arizona State: With the win and likely return to the rankings, Edwards is trying to avoid his team now being considered an early favorite to reach the conference title game on Dec. 3 in Las Vegas.

“Well, it’s a week to week situation in the Pac-12. We all know that, that’s how it works in our conference,” Edwards said. “You never know what’s going on. You just see it. You think, ‘Oh,’ and then somebody loses, I just think, every week, and that’s how we approach it."

UCLA: The Bruins need to fix their suspect pass defense if they want to post the program's first winning season since 2015. They have allowed nine pass plays of 40 yards or more, which is the most by a Power Five program and second-most nationally.

UCLA: Travels to Arizona on Saturday.