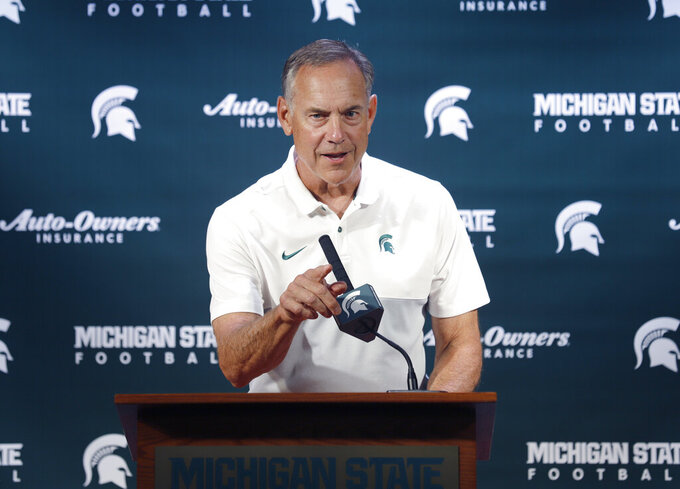 "Big Ten championship," the senior defensive end said. "That's what we want. Anything less would be a failure."

That kind of talk doesn't feel too outlandish for the Spartans — but the team has slipped a bit the past three seasons. After conference titles in 2013 and 2015, the latter of which led to a playoff appearance, Michigan State is just 20-18 over its last 38 games. Williams and the defense should still be formidable, but the Spartans have a lot to fix offensively.

"We're not going to expand on that right now," Dantonio said when asked about how extensive the offensive changes might be. "You've got to leave something in the bag."

Dantonio certainly understands that last season's showing — in which the Spartans finished next to last in the Big Ten in scoring — wasn't good enough. He didn't bring in a whole new set of assistants, but he did shift roles around on the offensive staff. Brad Salem, who had been the quarterbacks coach, took over as offensive coordinator and running backs coach. Dave Warner and Jim Bollman, who had been co-offensive coordinators, were reassigned. Warner coaches quarterbacks now, and Bollman coaches the offensive line.

The staff will have a senior quarterback to work with in Brian Lewerke. He's had an up-and-down career, leading the Spartans to 10 wins in impressive fashion in 2017 before struggling last year. Lewerke completed 54 percent of his passes last season, throwing for only eight touchdowns with 11 interceptions.

"I think that he's bouncing back," Dantonio said. "He was hurt some last year, but really beyond that, I think it's tough when everything is going so well for you as a sophomore, and things don't go quite so well and things start to crumble around you from the media. Not that I'm on you guys, but it's human nature. You've got to be able to stand back up. That's part of it, and I think he's got that."

The Spartans open the season at home against Tulsa on Aug. 30.