Duke becomes bowl eligible with win over short-handed BC 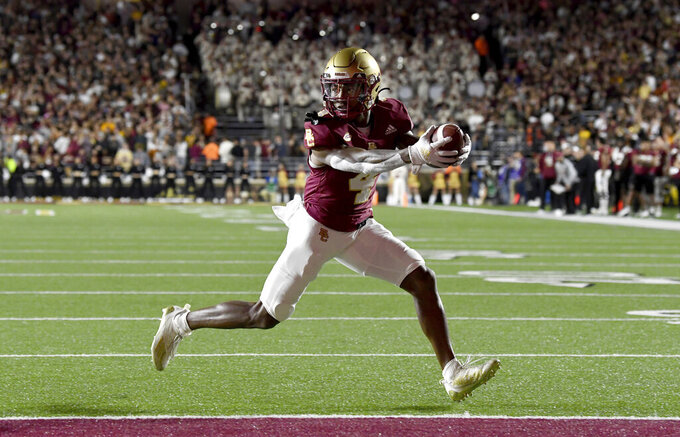 Boston College's Zay Flowers scores a touchdown against Duke during the first half of an NCAA college football game Friday, Nov. 4, 2022, in Boston. (AP Photo/Mark Stockwell) 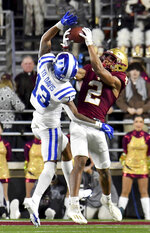 CHESTNUT HILL, Mass. (AP) — Riley Leonard threw for 158 yards and a touchdown, and he ran for 96 yards and another score to help Duke beat short-handed Boston College 38-31 on Friday night.

“Just a really monumental night for our program,” Elko said. “For us to come from where we were 10 months ago to here, bowl eligible with three games to go. Just a testament to everybody in our program and our university from the top down.”

Boston College (2-7, 1-5) was without quarterback Phil Jurkovec due to a right knee injury, but freshman Emmett Morehead shined in his first career start, throwing for four touchdowns with no interceptions.

“It’s the first game Emmett’s started since his junior year of high school. ... We put him in some really tough situations, but he showed leadership, he showed poise," said BC coach Jeff Hafley.

Duke forced a three-and-out to begin the second half and Jaquez Moore scored on a 24-yard run to extend its lead to 31-14. Boston College cut its deficit to 10 points but opted for an onside kick with 3:31 left in the third quarter and Duke recovered it before another score by Moore.

“At halftime we kind of got chewed into a little bit because like we weren’t playing very well,” Duke defensive tackle DeWayne Carter said. “You look at the third quarter, we’ve struggled a lot there this year. It’s no secret. So we came out and just had to set the tone for the half.”

Boston College got within 10 points again after a 75-yard drive ended in Morehead's 26-yard pass to fellow freshman Joseph Griffin Jr. with 12:07 remaining.

“He's (Griffin) six-foot four, so that's rare." Morehead said about his connections with Griffin. “He's just a freak athlete, and with a basketball background, he's really good at tracking the ball.”

The Eagles added a 34-yard field goal with 17 seconds left, but Duke recovered another onside kick to seal it.

Moore finished with 82 yards rushing in his first multi-touchdown game for Duke. Leonard went untouched on a 60-yard touchdown on the sixth play of the game, and his 8-yard scoring pass to Sahmir Hagans made it 24-7.

Morehead was 27 of 45 for 330 yards passing for Boston College, which lost its fourth straight game. Joseph Griffin Jr. had 103 yards receiving and two touchdowns, and Zay Flowers added 65 yards and two scores.

Morehead made a statement, becoming the first Boston College QB with four passing TDs since Dennis Grosel in 2020. Boston College played mistake-free football against a Duke team that was coming off a program-high eight turnovers in its 45-21 win over Miami.

Duke continued its dominance on the ground, securing its sixth game with 200-plus rushing yards this season. Four rushers combined for 232 yards after Duke entered ranked second in the ACC and 21st nationally with 205.1 yards per game.

Boston College plays at No. 21 North Carolina State on Nov. 12.