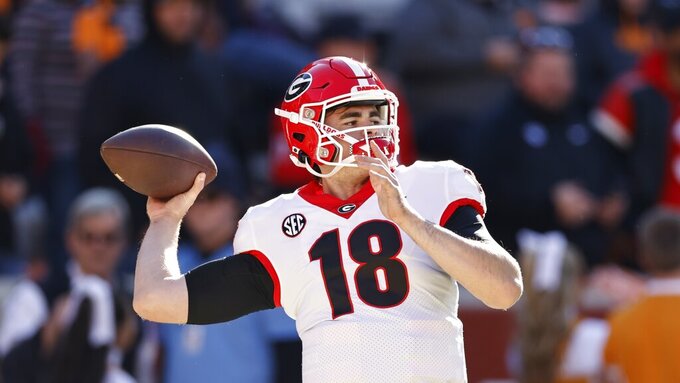 Daniels made the announcement on Instagram following a weekend visit to West Virginia’s campus. Daniels also had visited Missouri and Oregon State in recent weeks. He is wrapping up undergraduate classes at Georgia and would be a graduate transfer for the Mountaineers.

Shortly after Daniels’ announcement, West Virginia offensive coordinator Graham Harrell posted a short video Wednesday on Twitter from a recent practice in which he yells, “Let’s go!” Harrell held the same position at Southern California when Daniels played there before transferring to Georgia for the 2020 season.

In two seasons at Georgia, Daniels completed 69% of his passes for 1,953 yards and 17 touchdowns with five interceptions. He went 7-0 as a starter.

West Virginia’s quarterback position opened up after two-year starter Jarret Doege announced in December that he was entering the transfer portal. The Mountaineers have three quarterbacks competing in spring practice: Garrett Greene, who threw for 147 yards and was the team’s third-leading rusher with 297 yards last season; freshman Nicco Marchiol, who enrolled at WVU in January, and redshirt freshman Will Crowder.

West Virginia will have all five starters back on the offensive line but lost leading rusher Leddie Brown to the NFL draft and saw several wide receivers enter the transfer portal in the offseason. West Virginia’s offense ranked near the bottom of the Big 12 last season.

Daniels played at Southern California in 2018 and missed nearly the entire 2019 season with a knee injury. Harrell was the Trojans’ offense coordinator from 2019-21 and was hired at West Virginia in January.

Daniels transferred to Georgia in 2020 but his injury kept him off the field until late in the season, when he started the final four games. He opened the 2021 season as the Bulldogs’ starter but was hampered by various injuries. Daniels played in only five games last year and was replaced by Stetson Bennett, who led the Bulldogs to the national championship.

West Virginia opens the 2022 season Sept. 1 at Pittsburgh, which also has another former Southern Cal quarterback on its roster, three-year starter Kedon Slovis.