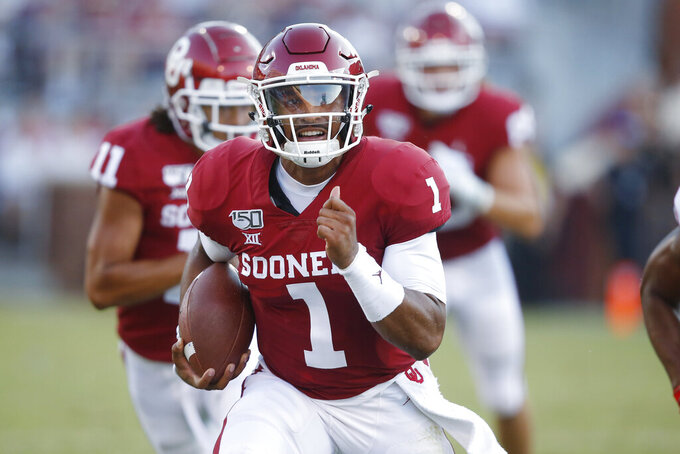 They just usually don't involve names such as Oklahoma and UCLA.

The fifth-ranked Sooners (2-0) head to Los Angeles this weekend on a roll as they attempt to reach the College Football Playoff for the third time in four seasons. The opposite is happening in Chip Kelly's second season with the Bruins. Winless UCLA (0-2) has dropped two games to Group of Five teams.

Oklahoma coach Lincoln Reilly is trying to make sure his team isn't looking ahead even though the Sooners are favored by more than three touchdowns.

"I know they've gotten off to a tough start but this is the classic deal, you look at the record and you think one thing, you turn on the tape and you see the guys running around on that football field, you see how well the defense is playing, you see a bunch of talented players offensively," he said. "We're not gonna get lulled to sleep by the fact of what people may or may not say on the outside."

Kelly, who has lost 11 of his first 14 games coaching the Bruins, is trying to preach patience with a roster that includes 87 freshmen and sophomores. The Bruins held a players only meeting after their 23-14 loss to San Diego State as tensions continue to run high.

"I think we all live in a society where we want a quick fix, but it doesn't exist and it's never existed in this game," Kelly said. "You've got to be consistent and get better at what you do and what we're good at."

Other things to watch as the Sooners and Bruins meet for the sixth time:

Oklahoma's Jalen Hurts is the only quarterback in the Football Bowl Subdivision with more than 500 passing yards (591) and 200 rushing yards (223) as he has established himself as a Heisman Trophy favorite.

"He has had very few negative plays. He's had a few more that he could have tucked down that he hasn't. He's been very efficient," Reilly said of Hurts, who leads the nation with a 254.3 passer efficiency rating.

The Sooners have 16 plays of over 30 yards and nine over 40. Both lead the nation.

UCLA has been prone to giving up first downs on third-and-long plays as well as committing penalties at the wrong time. Sophomore corner Elijah Gates has gotten called twice for pass interference, once for defensive holding and has given up a couple of key receptions on third down.

"We've got to be more aggressive and lock in on the little things," Gates said.

Oklahoma is among the national leaders in red zone touchdowns. The Sooners have been inside the opponent's 20 yard line 13 times and have scored 12 TDs.

If UCLA is going to have any shot of pulling off an upset, it is going to have to establish its running game. Joshua Kelley has been plagued by a knee injury but returned last week against San Diego State and scored a touchdown. Demetric Felton has also received plenty of carries after switching from receiver to running back.

If the Bruins can get their running game going, it should help them in time of possession. Their 21:38 average is last in the nation.

The Sooners' last trip to California was not pleasant. They lost to Georgia in double overtime in the 2018 Rose Bowl, which was a College Football Playoff semifinal game.