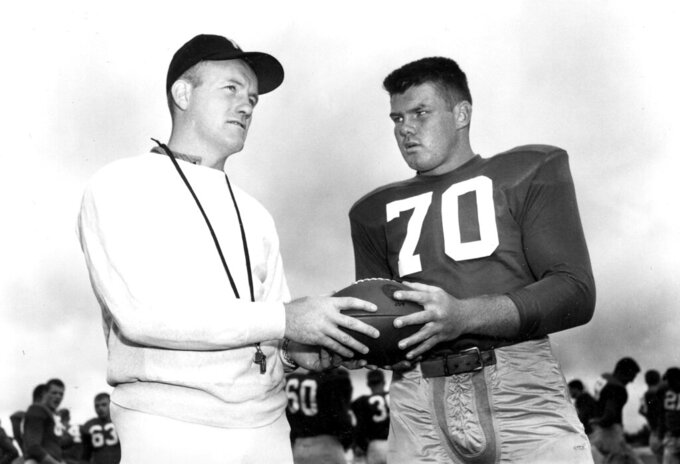 SOUTH BEND, Ind. (AP) — Terry Brennan, a star halfback on three unbeaten Notre Dame teams who was hailed as a wunderkind when he succeeded Irish coaching great Frank Leahy at just 25 years old, has died. He was 93.

The school announced his death Wednesday. Brennan died Tuesday, said the funeral home in Skokie, Illinois, handling the arrangements. He had lived in nearby Wilmette.

As both a player and coach, Brennan took part in games that rank among the biggest in Notre Dame history.

In 1946, Brennan made a key interception when the second-ranked Irish played to a 0-0 tie against No. 1 Army at packed Yankee Stadium in a matchup dubbed “The Game of the Century.”

Army drove to the Notre Dame 12, but Brennan picked off a pass at the 5. On the next play, he turned in Notre Dame’s longest run of 22 yards.

Both teams finished the season unbeaten and neither played in bowls. Notre Dame was voted No. 1 in the final AP poll and Army finished No. 2.

“Most of us were young guys and didn’t realize how big it was until 10 or 20 years later,” he said.

Just over a decade later, he coached the Irish to a 7-0 victory over Oklahoma in 1957 that ended the Sooners’ record 47-game winning streak.

After his playing career ended, Brennan was drafted by the NFL but instead chose to coach at Mount Carmel High School in Chicago while earning a law degree from DePaul University. After leading Mount Carmel to city championships in 1951, 1952 and 1953, Brennan was hired to coach the freshman team at Notre Dame.

A season later, Brennan was promoted to head coach in a move that shocked the college football world. Leahy had won four national titles in 11 seasons at Notre Dame, but retired due to health concerns.

Brennan started strong, with Notre Dame finishing 9-1 and ranked No. 4 in 1954 and 8-2 and No. 9 a season later. But the Irish dropped to 2-8 in 1956 despite having Heisman Trophy-winning quarterback Paul Hornung, and were beaten 47-14 by Michigan State and 40-0 by Oklahoma in South Bend in what was the team’s most-lopsided loss at Notre Dame Stadium.

As a result, the school’s faculty board in control of athletics recommended Brennan be fired. But The Rev. Theodore Hesburgh, president of the university, decided to bring Brennan back.

Notre Dame went 7-3 the next season, finishing No. 10 and boosted by the big upset of Oklahoma.

Brennan said in 2007 that when the Irish were blown out by Oklahoma in 1956, he took some chances that didn’t work. He felt more confident of his team’s ability in 1957, so he called the game more conservatively and the defense played particularly well.

“You never play a perfect game, but I don’t think the guys made a lot of mistakes,” he said. “There were very few, if any, and that was the key.”

“The silence was deafening,” he said.

Brennan was fired after the Irish finished 6-4 in 1958, with the dismissal coming four days before Christmas. The move was criticized by many not only because of its timing, but supporters said Brennan was taking the fall after the school cut back on scholarships as it raised academic standards.

Brennan finished with a record of 32-18, a .640 winning percentage. He was succeeded by Joe Kuharich, another former Notre Dame player who posted a 17-23 record in four seasons.

That was the last time Brennan coached football. He served as a player conditioning coach for the Cincinnati Reds’ 1959 spring training. He worked for years in banking and investment and lived in suburban Chicago.

Brennan was preceded in death by his wife, Kel. He is survived by four son, two daughters, 25 grandchildren and 32 great-grandchildren.