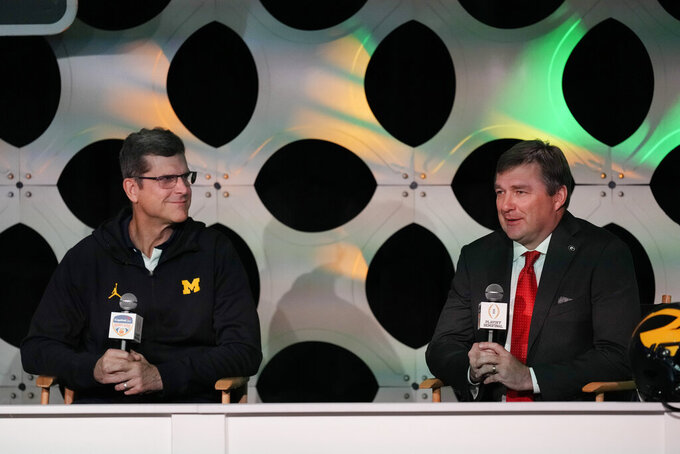 They’ve got the College Football Playoff semifinal matchup at the Orange Bowl on Friday. Christmas was this past Saturday, of course.

And on Dec. 23, both coaches had a birthday.

They were born 12 years apart — Harbaugh in 1963, Smart in 1975 — and in another weird twist, both were born in the state of their program’s biggest rival these days. Harbaugh was born in Ohio. Smart was born in Alabama.

“I think it’s cool whenever I meet somebody that has the same birthday,” Harbaugh said. “It’s such a unique one, I think. Dec. 23, two days before Christmas. So, we’ve got that in common, Kirby. That’s pretty cool.”

There are some drawbacks to the timing, Harbaugh noted. Being so close to Christmas, sometimes the gifts get doubled up. And birthday parties, he said, tend to become afterthoughts because of the holiday schedule.

Harbaugh reported that he got an excellent birthday haul this year, some homemade gifts from his kids and GPS trackers for his wallet and keys from his son Jay. Smart, who appeared with Harbaugh at a virtual news conference Thursday, said the red tie he was wearing was a birthday gift.

“I do like the fact that it comes at a time in a coaches’ life that you’re usually off,” Smart said. “We’ve traditionally taken off somewhere either the 22nd or 23rd, somewhere around Christmas.”

Cincinnati is facing the AP’s No. 1-ranked team for the third time in program history, seeking its first victory over such an opponent. The Bearcats play Alabama in the Cotton Bowl on Friday.

Oddsmakers don’t give Cincinnati much of a chance. Fickell doesn’t mind.

“We’ve said it all year long, that the best team doesn’t always win the game,” Fickell said. “It’s just a reality. The teams that play the best win the football game.”

Former Michigan coach Bo Schembechler had a saying that has become a Wolverines credo: “Those who stay will be champions.”

Harbaugh announced last month that any bonus money he receives from the Wolverines’ accomplishments this season would be donated to workers at the university who saw their salaries cut during the pandemic. And he said Schembechler’s famous phrase was part of how he and his wife, Sarah, came up with the idea to gift the bonus money.

“It’s always resonated with me since Day 1,” Harbaugh said. “And those who stayed, through the pandemic, there were voluntary pay cuts, mandatory pay cuts, that kind of thing. To be able to reward those that stayed, in that way, it was something that Sarah, my wife, and I wanted to do.”

It is not an insignificant gift: Harbaugh has collected at least $2.275 million in bonus money this season, with a chance to earn another $1 million if the Wolverines win the national championship. It comes after Harbaugh agreed to a restructured contract after last season, where he accepted cuts to his base salary and the buyout if Michigan decided to let him go.

“Didn’t really mean anything to me,” Harbaugh said of the contract issues. “No big deal.”

Alabama coach Nick Saban grew up in West Virginia, but his football and coaching roots run deep in Ohio and the Mid-American Conference, often referred to as the Cradle of Coaches.

Saban played at Kent State and started his coaching career at his alma mater.

Saban was also an assistant coach with the Cleveland Browns under Bill Belichick for four years.

“There was a time when we lived in Ohio and spent so much time there that we sort of felt like we were more residents of Ohio than we were of West Virginia, in terms of where we were from,” Saban said. “And certainly, professionally, if not true personally, a lot of things that helped me grow and develop as a coach happened in Ohio with all the experiences that we had. Don James was an instrumental part in getting me started in coaching. And certainly learned a tremendous amount from him and (former Ohio State coach) Earle Bruce and Bill Belichick.”

John Madden’s death this week resonated around all levels of football, but it particularly hit home for Michigan.

Madden’s grandson, Jesse Madden, is a freshman backup quarterback for the Wolverines.