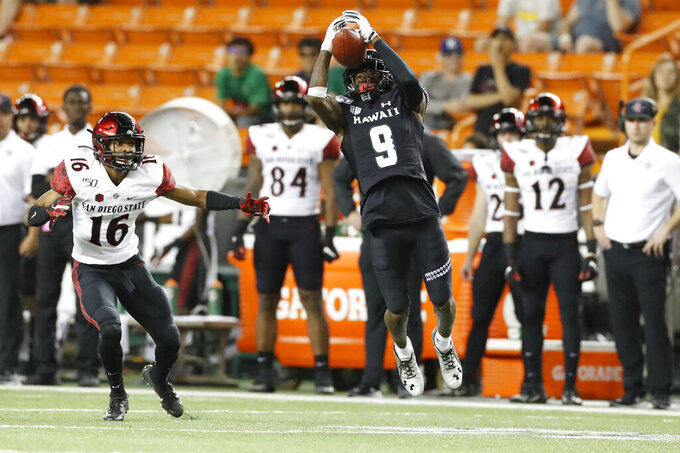 HONOLULU (AP) — Jason-Matthew Sharsh caught 10 passes for 95 yards and a touchdown on Saturday night, and Hawaii held off San Diego State 14-11 in a battle for the Mountain West Conference West Division title.

The Rainbow Warriors (8-4, 5-3) tied the Aztecs (8-3, 5-3) in the standings after the final conference game for both teams. With the head-to-head tiebreaker, Hawaii earned a spot in the Mountain West championship game and will face No. 20 Boise State on Dec. 7.

Cole McDonald’s 5-yard TD pass to Sharsh opened the scoring in the first quarter, and Fred Holly III’s 11-yard TD run made it 14-3 in the third.

Ryan Agnew scored on a 5-yard keeper and ran in the two-point conversion to cut the Aztecs’ deficit to 14-11 with 12:58 left in the game.

San Diego State drove 50 yards to the Hawaii 31 to set up Matt Araiza with a 48-yard attempt with 8 seconds left. Araiza missed, and Hawaii ran out the clock for the win.