Hawkeyes' Johnson is next Nebraskan out to knock off Huskers 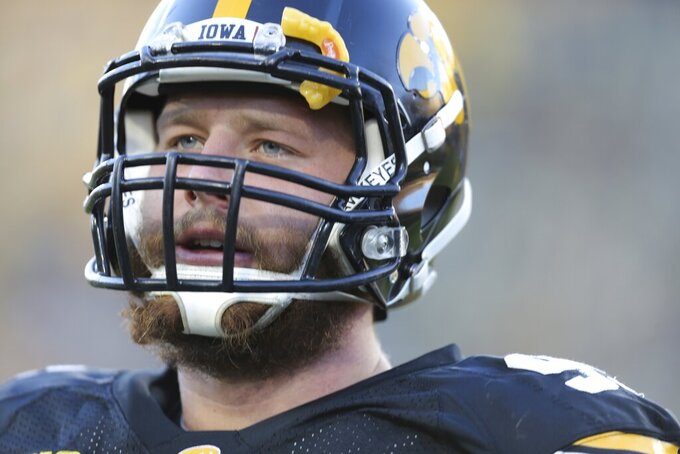 FILE - Iowa defensive lineman Drew Ott warms up before the start of an NCAA college football game against Pittsburgh, Saturday, Sept. 19, 2015, in Iowa City, Iowa. Iowa has regularly recruited football players out of Nebraska, and several of them have played key roles in the Hawkeyes’ six-game winning streak against the Cornhuskers. Ott, from Giltner, Neb., was a starter in Iowa’s 38-17 win over Nebraska in 2013 and its 37-34 overtime loss to the Huskers in 2014. The teams play Friday Nov. 26, 2021, in Lincoln, Nebraska. (AP Photo/Justin Hayworth, File)

IOWA CITY, Iowa (AP) — Iowa has owned the series against Nebraska in the 10 years since the Cornhuskers joined the Big Ten, and recruits the Hawkeyes pulled out of the state immediately to their west have played major roles in the run.

Four Nebraskans have been Iowa starters over the six straight years the Hawkeyes have beaten the Huskers. Wide receiver Keagan Johnson from Bellevue will be the fifth when the 17th-ranked Hawkeyes go for their seventh win in a row over Nebraska on Friday.

That Johnson is wearing black and gold instead of scarlet and cream was a gut punch to the Big Red. His father, Clester Johnson, played on Nebraska's 1994-95 national championship teams.

“It’s not any other game, just with the history with Nebraska’s program,” Keagan Johnson said. “Right now I’m just locked in on playing this game, being focused, not listen to the distractions, because I feel like that can hinder the path of getting prepared for the game.”

The Iowa football program has connections to the state of Nebraska dating at least to the 1930s. The Hawkeyes' home is Kinnick Stadium, named in honor of 1939 Heisman Trophy winner Nile Kinnick, a native Iowan who played his last two years of high school football in Omaha.

Larry Station of Omaha signed with Iowa in 1983 and was one of few Nebraskans who got away in Tom Osborne's 25 years as coach. Station became Iowa's all-time leading tackler, a two-time consensus All-American and a College Football Hall of Fame inductee.

Iowa's Kirk Ferentz has signed eight Nebraskans since 2006. The first three after Nebraska joined the Big Ten in 2011 were linebacker Cole Fisher (Omaha) and defensive linemen Nathan Bazata (Howells) and Drew Ott (Giltner). None of them received offers from then-Huskers coach Bo Pelini.

The snubs provided plenty of motivation when the Hawkeyes and Huskers met for their annual day-after-Thanksgiving game. Fisher, whose father and brother played for the Huskers, made 11 tackles and had an interception in the 2015 win. Bazata started in three straight wins (2015-17), and Ott started the the 2013 win and 2014 overtime loss.

Tight end Noah Fant (Omaha), now with the Denver Broncos, turned down the Huskers to sign with Iowa and caught three passes for 116 yards and two touchdowns in the 2017 win.

Next up is Keagan Johnson, a four-star recruit out of Bellevue West who appears to be developing into one of the Big Ten's top deep threats of the future.

“Hopefully it’s hard when they come over here and steal our guys, too,” he said. “It’s gone both ways. Ultimately in recruiting, you hope the prospect finds a place where he feels more comfortable. More importantly, you hope two or three years later they feel really good about that decision."

Nebraska has not had nearly the success Iowa has in recruiting across the Missouri River. None of the six Iowans signed since 2016 have made an impact. Defensive end Blaise Gunnerson (Carroll) could see extended action this week because of injuries and four-star tight end Thomas Fidone (Council Bluffs) was set back by a spring knee injury.

The Hawkeyes' Johnson is trying to take a “just another game” approach to Friday's game. That's easier said than done.

“I’ve been to many game days in Lincoln,” he said. “Having a father who played there, it was just natural going. In Nebraska, football is the thing."

Clester Johnson played wingback at Nebraska when it was the nation's dominant program. Keagan had to make his college choice at a time the Huskers were, and continue to be, mired in their worst stretch since the 1950s.

“I don’t think it had anything to do with what’s happened in Lincoln or any other school,” Johnson said. “It was just what stood out with me at Iowa, the genuineness of the coaching staff. That’s what made me want to come here. Out of the offers I had, I felt like this was the best spot for me.”

Johnson enrolled last spring, became a starter early in the season and has 16 catches for 328 yards and two touchdowns.

Johnson said he will keep his routine the same this week. On Thursday, as he always does the night before games, he will speak with his dad.

“Right now, I understand I don’t need to be Superman in this game,” he said. "I just want to win the game. This game means something to me. But just trying to keep it like any other game is a big thing for me.”