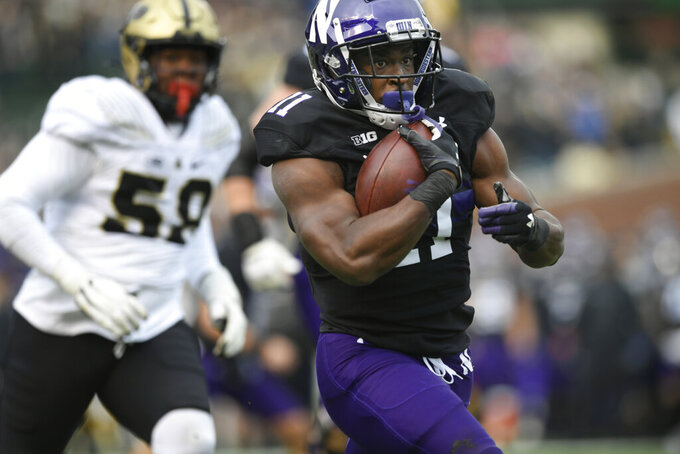 Northwestern running back Andrew Clair (11) runs ahead of Purdue's Branson Deen (58) during the first half of an NCAA college football game, Saturday, Nov. 20, 2021 at Wrigley Field in Chicago. Purdue won 32-14.(AP Photo/Paul Beaty)

CHAMPAIGN, Ill. (AP) — Illinois must beat a struggling, determined Northwestern team at home on Saturday to keep alive the slimmest of hopes for a bowl bid.

If Illinois (4-7, 3-5 Big Ten) can beat Northwestern (3-8, 1-7) and other things fall into place, the Illini could find themselves in their second bowl appearance in the five past years. First-year coach Bret Bielema said he would welcome the 15 extra practices allowed along with a bowl trip.

“I think that anything we can do to give us a chance to practice, I’m all for it,” he said. “I just think it’s invaluable. The only way to get good at football is to play football. During our bye weeks, some of the things that you’ve seen, the progression that we’ve made through the course of the year is through practice. To be able to do that again would be a no-brainer.”

The Wildcats have lost five straight, including an 18-point loss to Purdue a week ago at Wrigley Field. Quarterback Andrew Marty got to start for Northwestern and completed 10 of 14 passes for 93 yards and one score, while Ryan Hilinski went eight of 11 through the air for 66 yards.

The ground game hasn’t been much better, with the Wildcats rushing 44 times for only 144 yards and a touchdown against Purdue. Evan Hull led the way with 96 yards and the score on 25 carries.

Illinois is coming off a 33-23 loss at Iowa. Illinois played well offensively, compiling 312 total yards as a team including 248 through the air.

Brandon Peters led the Illini offense with 16 of 36 passing for 248 yards, two touchdowns and two interceptions.

The annual battle for the “Land of Lincoln Trophy” represents one of college football’s longest rivalries. A seventh consecutive win by the Wildcats will tie the longest streak in the series and even the in-state schools at 55 head-to-head wins.

“Any year, you always want to beat your rival,” Northwestern coach Pat Fitzgerald said. “It doesn’t matter if you’re in grade school football or high school, college or pro. It’s always a bigger week. There’s always great friendships and respect on both sides of rivalries.”

When Bielema missed last week’s Illinois loss to Iowa after testing positive for COVID-19, Fitzgerald was the first Big Ten coach to reach out to him.

“Fitz and I have known each other for a long time,” Bielema said. “There’s a lot of mutual respect.”

Both Fitzgerald and Bielema played in the Big Ten and served as assistant coaches in the conference. Both eventually became head coaches during the 2006 season, Fitzgerald at Northwestern and Bielema at Wisconsin.

“It’s great to have him back in the league,” Fitzgerald said. “This has always been a great rivalry built on respect, and I don’t see any change now with coach Bielema at the helm.”

Northwestern defeated Illinois 28-10 in their most recent meeting on Dec. 12, 2020. The Illini haven’t beaten the Wildcats since 2014.