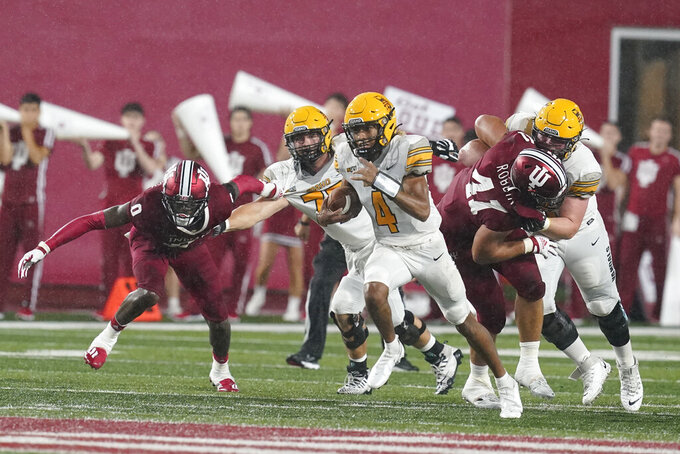 BLOOMINGTON, Ind. (AP) — Indiana scored 29 consecutive points, including 23 in the third quarter, to rebound from a sluggish start in a 35-22 victory over FCS-member Idaho on a rainy Saturday night.

The game was delayed 35 minutes by a lightning warning, and the Hoosiers didn't show up at the outset against the three-touchdown underdog Vandals, who led 10-0 at halftime.

Then everything clicked, and rather quickly, for Indiana.

Backup quarterback Donaven McCulley started the comeback with a 4-yard TD rush. After a bad Idaho snap resulted in a safety, Connor Bazelak threw touchdown passes of 43 yards to A.J. Barner and 26 yards to D.J. Matthews Jr. The latter three scores came in a span of 5:10.

“I got after ‘em at halftime,” Indiana coach Tom Allen said. “I told the coaches to get after ’em at halftime. But it was also just, ‘Hey guys, just play football.’”

Much like his team, Bazelak improved dramatically after the break. The junior transfer quarterback completed 10 of 12 throws for 148 yards and two TDs in the third quarter. He connected on just 6 of 17 passes for 49 yards with an interception before the break.

“It's hard not to be frustrated, but I think the main message is just ‘stay the course,’” Bazelak said. “That's what I was telling everyone.”

Indiana amassed 239 yards in the third period after gaining just 110 in the first half.

“That's not acceptable in my mind, as far as the standard with which we have to play,” Allen said. “Too many mistakes. It's not good enough. ... We know this is not the standard we have to have as a football team."

The Vandals, who dominated time of possession with 170 first-half yards, managed just 10 yards in the quarter.

“Give credit to Indiana. They made some good adjustments at halftime,” Idaho coach Jason Eck said. “They came back and played better in the second half and kicked their butts into gear. We’ve got to go with them. We’ve got to up our game.”

Josh Henderson scored on an 8-yard TD run to push Indiana's lead to 29-10 just 5 seconds into the final quarter.

Hoosiers running back Shaun Shivers rushed for 155 yards and one score.

“I think we got wore down a little bit up front on our D-line by their O-line,” Eck said. “They've got a good O-line, a Big Ten O-line. Look at warm-ups. They're a lot bigger team than us.”

“We just have to work on our finish,” Johnson said. “Our guys battled their butts off.”

Idaho: One week after blowing a 10-0 lead in a 24-17 loss at Washington State, the Vandals suffered a similar collapse. The visitors dominated the first half with a goal-line stand at the 1-yard line and two forced turnovers. Once again, there were positives to build upon, albeit in a loss.

Indiana: At least the Hoosiers didn't wait until the final minute to prevail, as was the case in an opening home win over Illinois. Whatever the reason for the lousy opening half against a team Indiana dominated 56-14 on the same field last year, the Hoosiers finally rebounded. The last time Indiana scored 35 points in a half was against Idaho last year, although those were before halftime.

Just as warm-ups were about to start, Memorial Stadium was hit by a torrential downpour with lightning that not only drove players and fans to shelter but caused the kickoff to be pushed back to 8:35 p.m. (EST). The steady rain continued as the game began. The skies flickered with lightning for a moment during halftime, but this time, no delay.

Dwyer, a true freshman, has scored in his first two college games for Idaho. He debuted with a 23-yard TD reception at Washington State and had a 1-yard scoring grab to start the scoring against Indiana.