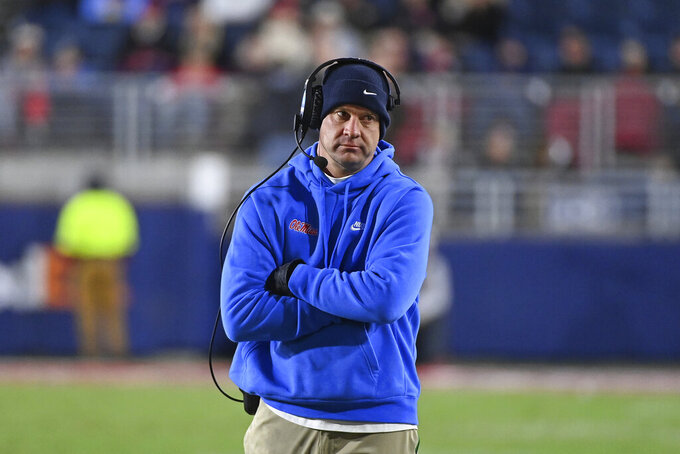 Mississippi head coach Lane Kiffin watches on during the second half of an NCAA college football game against Vanderbilt in Oxford, Miss., Saturday, Nov. 20, 2021. No. 10 Mississippi won 31-17. (AP Photo/Thomas Graning)

The SEC West Division race is over for Ole Miss and Mississippi State. Yet, both the Rebels and Bulldogs have high-powered offenses that will put on a must-see Thanksgiving night show. Ole Miss leads the SEC with 517 yards a game while Mississippi State tops the league with more than 390 yards a game passing this season. Naturally, the attacks are triggered by experienced and talented quarterbacks. The Rebels' Matt Corral led the country in total offense a year ago and has continued that run this season. He's passed for 3,105 yards and 19 touchdowns and run for 552 yards and 10 touchdowns. Corral's Bulldogs counterpart is Will Rogers, who has thrived under coach Mike Leach's pass-heavy schemes. Rogers has thrown for 4,113 yards and 34 touchdowns to lead the SEC in total offense. Sure sounds like a game of whoever has the ball last wins. Mississippi won last year's rivalry game, 31-24, and are seeking its first win at Mississippi State since 2017.

Several SEC teams have finished league play and will close the season against state rivals like No. 1 Georgia facing Georgia Tech, Florida facing Florida State, Kentucky facing Louisville and South Carolina facing Clemson. Those games weren't held last year due to the SEC-only, 10-game schedule due to the COVID-19 pandemic.

No. 14 Texas A&M's offense vs. LSU's offense. Both teams, known for high scoring, have struggled to keep up at times in the SEC. The Aggies have averaged 29.8 points a game this season, 11th best in the league. LSU is another place behind in 12th at 27.1 points a game. Texas A&M has scored only 39 points total in its past two SEC games, including a 29-19 loss to Ole Miss two weeks ago. LSU hasn't surpassed 17 points in any of its past three SEC games.

Just a few weeks ago, the Iron Bowl seemed like it might be an SEC West Division showdown as both No. 3 Alabama and rival Auburn were in contention for the league championship game and the College Football Playoff. But the Tigers' fortunes have tanked the past month with losses to No. 14 Texas A&M, Mississippi State and South Carolina the past three weeks. Auburn had leads of 28-3 over the Bulldogs before falling 43-34. The Tigers were up 14-0 on the Gamecocks last week, yet fell 21-17. Alabama can bring out the best out of Auburn in one of the fiercest rivalries in college football. Still, it's hard to imagine the Tigers slowing down Alabama's potent attack, which leads the SEC with 59 offensive touchdowns.

No. 1 Georgia looks to go 12-0 for the first time since the school's national champions in 1980 when it takes Georgia Tech on Saturday. ... Tennessee leads the country with an average of 2.95 plays per minute. The Vols close the regular season against in-state rival Vanderbilt. ... No. 3 Alabama extended its SEC record to 14 straight seasons with 10-or-more wins when it defeated Arkansas last week. ... Alabama quarterback Bryce Young has completed 77 percent of his third-down throws (67 of 87) with 11 touchdowns and three interceptions. ... Kentucky has a 2,000-yard passer (Will Levis), a 1,000-yard rusher (Chris Rodriguez Jr.) and a 1,000-yard receiver (Wan'Dale Robinson) for just the second time in school history. It first achieved that feat in 2007. ... Missouri's Tyler Badie had 146 yards rushing in the OT win against Florida last week. He gained 127 of those yards in the second half and overtime. ... LSU linebacker Damone Clark leads the SEC with 125 tackles. He also tops the nation with 11.4 tackles per game.

Alabama linebacker Will Anderson Jr. tops the SEC in sacks and tackles for loss in fueling the Crimson Tide's strong defense. The 6-foot-4, 234-pound sophomore has had three or more tackles for loss in six of Alabama's 11 games this season. Anderson has 27 1/2 tackles behind the line of scrimmage and 13 1/5 sacks heading into the Iron Bowl, the Tide's annual rivalry game with Auburn.