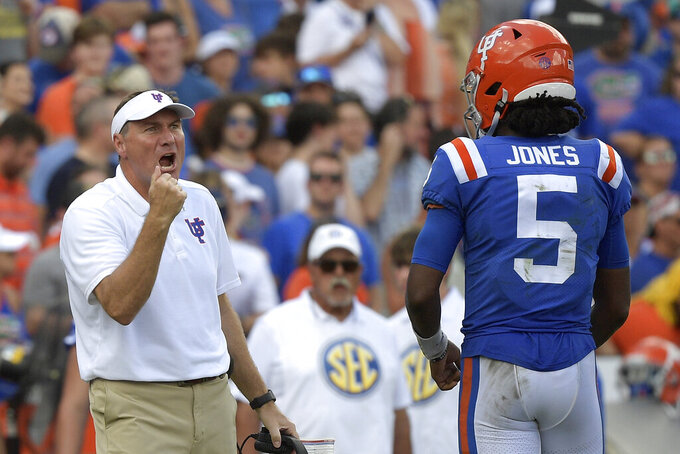 GAINESVILLE, Fla. (AP) — Florida quarterback Emory Jones has unwaveringly supported backup Anthony Richardson all season. He eagerly coached Richardson from the sideline. He enthusiastically cheered for Richardson after every big play. He openly pulled for Richardson's return from a strained right hamstring.

Now, though, it's time for Jones to bask in the spotlight.

“I looked up at the scoreboard one time and they said I threw four, and I thought it was wrong,” Jones said. “I really didn't remember doing it. All the guys around me, they definitely were the biggest part of that. They make it all happen.”

It was a feel-good victory for the Gators on homecoming after a gut-wrenching loss at Kentucky essentially knocked coach Dan Mullen’s team out of contention in the Southeastern Conference’s Eastern Division.

Jones was the star of this one. He completed 14 of 22 passes for 273 yards, with TD passes to Ja’Quavion Fraziars, Trent Whittemore, Dameon Pierce and Jacob Copeland. Pierce also scored twice more on short runs.

Richardson played sparingly for the second straight week. His first pass was intercepted. He returned the following series but ended up giving way to Jones until getting back on the field for mop-up duty in the fourth quarter.

“I think all the quarterbacks have a learning curve,” Mullen said. "That why there’s development that goes into it. I do think Anthony works his tail off, has a great approach in what he’s doing, great approach at getting ready at practice.

"I see him improving. The nice thing, we’re throwing him in and he’s getting some opportunities during the game to go show what he can do, and he’s got to continue to improve.”

Vanderbilt had several chances to make the game more competitive, but Alabama transfer Joseph Bulovas missed three field goals. He was errant from 39, 41 and 33 yards out. The Commodores also had a touchdown overturned when Chris Pierce failed to maintain possession on a fourth-down catch when he hit the ground in the second quarter.

“We had a great day moving the ball,” Vandy receiver Cam Johnson said. “When it comes down to it, it was a matter of shooting ourselves in the foot.”

Vanderbilt: First-year head coach Chris Lea has a rebuilding project on his hands, but he surely can draw plenty of positives from this loss. The Commodores ran 80 plays and were 8 of 20 on third down.

“If you can make your field goals and score touchdowns when you're on their side of the field, all of a sudden the energy shifts,” Lea said.

Florida: Mullen wasn’t pleased with his team’s first-half performance. The Gators led 21-0, but it could have been 21-13. He ripped into players and halftime and finally got them going with a fake punt on the fourth play of the third quarter.

Florida is the only two-loss team in The Associated Press college football poll. The Gators are unlikely to move up much, if at all, following a lackluster home victory against an overmatched team.

The Gators played their third consecutive game without preseason all-SEC cornerback Kaiir Elam, who is recovering from a sprained right knee. The unit, which also is without starter Jaydon Hill (knee), got even thinner in the first quarter Saturday when Tre’Vez Johnson was ejected for targeting.

Tim Tebow and Billy Donovan are finally in Florida’s Hall of Fame. Tebow, the 2007 Heisman Trophy-winning quarterback, and Donovan, the most accomplished men’s basketball coach in school history, were inducted Friday night as part of the 2020 class. The ceremony was delayed a year because of COVID-19.

Vanderbilt plays at South Carolina next Saturday. The Commodores have lost 12 straight in the series.

Florida plays at LSU next Saturday. The Gators have dropped four of five in Baton Rouge.