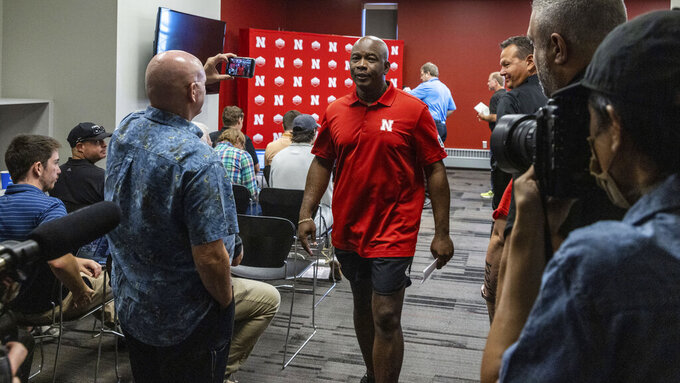 LINCOLN, Neb. (AP) — Mickey Joseph said Tuesday that he wants to be Nebraska's next head football coach and not just the interim guy for the next nine games.

Joseph met with the media for the first time since athletic director Trev Alberts asked him to lead the program the rest of the season following the firing of Scott Frost on Sunday.

“I think when you accept the job as interim head coach, that's the opportunity you're working for, to become the head coach,” Joseph said. “But we understand what goes along with this profession. It’s wins and losses, and that’s what it’s going to depend on.”

Joseph, 54, opens his stint as interim head coach with a home game against former conference rival and sixth-ranked Oklahoma (2-0) on Saturday. The Huskers (1-2) have lost 18 straight against Top 25 opponents.

Joseph played quarterback at Nebraska under Tom Osborne from 1988-91, has worked at all levels of college football and was receivers coach and assistant head coach at LSU before joining the Cornhuskers' staff this year. He's best known for his abilities to recruit and develop NFL talent.

Alberts said he told Joseph he planned to do an exhaustive coach search. The expectation is that money will be no object because of the huge increase in cash coming to Big Ten schools when the $1 billion-per-year conference television contract begins in 2023.

“We will see how the season unfolds, but I think we have an opportunity to hire an outstanding coach to lead our program,” Alberts said. "I would love to see Mickey grow into that, and we will just see where it goes. We will do a national search and if at that point, if Mickey is an obvious candidate, he will be part of that conversation as well.”

Joseph is the first Black head coach at Nebraska, interim or permanent, in any sport.

Richard Lapchick, director of the Institute for Diversity and Ethics in Sport at Central Florida, told The Associated Press he expects Nebraska to take Joseph's candidacy seriously.

“Nebraska should give him a hard look with the understanding that turning the program around that quickly is a difficult situation,” Lapchick said. “Measuring his success can’t only be measured on the wins and losses he has but the relationships with the players, how hard they play, how the team congeals under his leadership.”

Turner Gill, also a Black former Nebraska assistant and quarterback under Osborne, was a finalist for the Cornhuskers’ job that went to Bo Pelini in 2007. Gill went on to become head coach at Buffalo, Kansas and Liberty.

Lapchick said the Nebraska athletic department has done diversity and inclusion training since the 1990s. Most other schools, he said, didn’t provide such training until after the death of George Floyd in 2019.

“I know the fact (Joseph) is the first doesn’t mean they weren’t trying to do that before,” he said. “I am very personally pleased — both wanting the best for Nebraska football but also changing what’s going on around America in general in light of the racial reckoning of the past several years and just the history of sport in America.”

Lapchick, who in 1984 helped found the pioneering Center for the Study of Sport in Society at Northeastern University, publishes an annual report card on racial and gender hiring practices and is a leading voice on diversity and inclusion in athletics.

Not including Joseph, there are eight Black head football coaches this season among the 65 Power Five schools, including Notre Dame. There are three in the Big Ten.

The fact Joseph has not been a head coach or coordinator at the Football Bowl Subdivision level doesn't work in his favor, Lapchick said.

“If that disqualifies him, that would tell me his candidacy was not genuine from the beginning,” Lapchick said, noting that Joseph will have at least nine games of experience at the end of the season.

This week's NCAA strength-of-schedule report shows Nebraska has the 20th-toughest remaining schedule based on its opponents' combined record of 15-4.