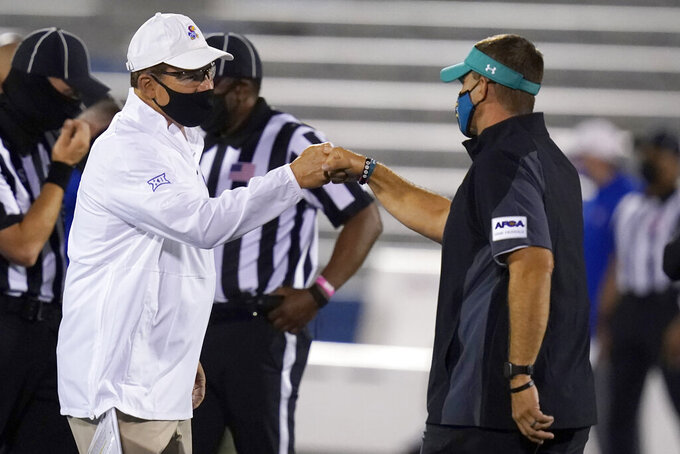 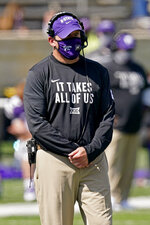 LAWRENCE, Kan. (AP) — Kansas and Kansas State had plenty of reasons to believe this season would produce another solid brick for the foundation of their programs, despite spring football being scuttled by the coronavirus and an offseason unlike any other.

Turns out things were crumbling right from the start.

There is still time to put the pieces back together, of course. But the Week 1 lumps taken by the Big 12 rivals at the hands of the Sun Belt — the Jayhawks lost to Coastal Carolina and the Wildcats to Arkansas State — means they head into conference play Saturday with very little momentum and facing a dramatic step up in competition.

The Jayhawks head to Baylor. The Wildcats travel to third-ranked Oklahoma.

“There's an old coach that said after your first game you gain 20% going into your second game,” Kansas coach Les Miles said. “I believe that old coach because that old coach was my old coach. I like the idea we're getting better and we will have a chance to improve, and we've been through a game and we can work on those things that were subpar.”

There were plenty of things subpar against the Chanticleers.

Kansas got off to a slow start, falling behind 28-3 by halftime. Three quarterbacks combined to throw for just 189 yards with two touchdowns and two interceptions. The ground game had 178 yards rushing but had to deal with the loss of star running back Pooka Williams, though his injury appears to be mild and he should play on Saturday.

Defensively, the Jayhawks allowed a quarterback making his first start to throw three touchdown passes while running for two more scores. And as good as their rushing total may have been, the Chanticleers piled up 185 yards on the ground.

“I think the offensive side, you know, will definitely continue to grow,” Miles said, “and I think they have to turn into a group that is proficient and capable. And without a game to have tried and practiced your special teams, your offense and defense, you end up with a real issue at times.”

The Jayhawks at least have that going for them Saturday. The Bears have yet to play after COVID-19 outbreaks wiped out a game against Houston and then a hastily scheduled game against Louisiana Tech meant to take its place.

The Wildcats wish they had that advantage against Oklahoma.

Instead, the Sooners unleashed new quarterback Spencer Rattler to the tune of 14-for-17 passing for 290 yards and four scores in a 48-0 rout of Missouri State. And they did it all while missing a bunch of players to the coronavirus and associated contact tracing.

In other words, the Sooners are probably the farthest thing from a choice bounce-back opponent for a team in Kansas State that was dinged up while blowing a big early lead against Arkansas State two weeks ago.

“We kind of went back to fall camp mode, worked Kansas State against Kansas State,” Wildcats coach Chris Klieman said. “We had four days of good-on-good and working our scheme against our system and trying to improve.”

The best place to start is probably the secondary, where the Wildcats were shredded by Red Wolves quarterbacks Logan Bonner and Layne Hatcher. The duo combined to throw four touchdown passes, three of them to Jonathan Adams Jr., whose grab in the end zone with 38 seconds remaining completed their 35-31 comeback victory.

It won't help matters that Klieman hinted that his defensive backfield could be thinned by COVID-19 tests.

“We know it’s going to be a tremendous challenge down in Norman,” he said, “and we're hopeful we continue to get some guys back that could potentially help us. Every day is a different animal on that because you never know who is going to be in practice, but the guys that were out there worked hard and are excited about the opportunity.”

This is a crucial season for both programs from the Sunflower State.

Klieman was tasked with two things: replacing Bill Snyder and taking the program from mediocrity to the same heights where his Hall of Fame predecessor once had it. Neither of those two tasks is easy, but Klieman showed in qualifying for a bowl game last season that he has the Wildcats headed in the right track.

The Jayhawks have been the league’s punching bag for more than a decade, churning through a series of coaches who have left the program in increasingly worse shape. But in Miles, they hoped to finally have a leader capable of building it back to relevance, and adding to three wins in his first season would have been a big step.

“We want to take the team we have now and make them better," Miles said. "We want to play more aggressively and with greater physicality and as we get through Game 1, then we get through Game 2, we are seeing the opportunity to step in and make changes and that's what we’ll do. I don't know if I've set any markers for improvement. I can tell you we want to win. And I can tell you this team will play hard and work to win.”