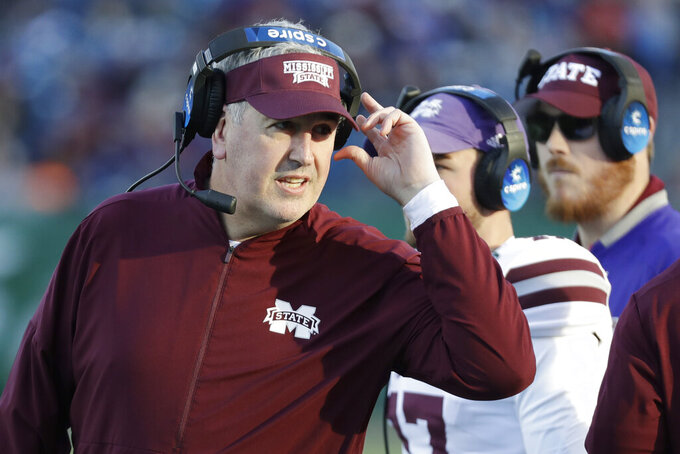 FILE - In this Dec. 30, 2019, file photo, Mississippi State head coach Joe Moorhead watches from the sideline in the first half of the Music City Bowl NCAA college football game against Louisville, in Nashville, Tenn. From new Akron coach Joe Moorhead to Central Michigan's Lew Nichols' pursuit of 2,000 yards, there are plenty of intriguing storylines around the league. (AP Photo/Mark Humphrey, File)

Northern Illinois went from lovable underdog to leader of the Mid-American Conference pack in one season.

Staying in front will be no walk in the park.

After coach Thomas Hammock's winless 2020 squad rebounded to win last year's league championship, the Huskies begin this season with a deeper, more experienced roster — and the tag of preseason favorite.

"We had a great year last year, but there’s still a lot of things we could have done better,” quarterback Rocky Lombardi said during the MAC's recent media day. “I don’t like to look too much at outside noise, good or bad. For us, it’s just about going out and handling what we do."

Repeating is never easy in the 12-team conference, which has produced a different champion each of the past six years. Since 2001, only two teams have captured back-to- back crowns — Central Michigan in 2006—07 and Northern Illinois in 2011-12.

With a familiar-looking depth chart, the Huskies seem poised to join the list.

Lombardi, a former starter at Michigan State, remains the incumbent in his sixth college season. He will play behind four 14-game starters on the offensive line, two running backs who combined for more than 1,100 yards and his two favorite receivers.

Add a defense with nine returning starters, including the entire front four and secondary, and it's obvious why the Huskies may pack a little more bite this fall.

The question is whether they can repeat how they did it last year — by thriving in close contests. Seven of their nine victories were decided by eight or fewer points.

“I think they got very comfortable in those one-possession games and I think we developed an edge and found a way to finish,” Hammock said. “It' easy to look at the scores and say they found a way, they got lucky. These guys are hungry and still have a tremendous chip on their shoulder.”

Miami (Ohio) and defending East Division champ Kent State are expected to be the strongest challengers.

The RedHawks are picked to win the East, largely because of quarterback Brett Gabbert and receiver Mac Hippenhammer, third team all-conference selections last year. Gabbert is the younger brother of NFL quarterback Blaine Gabbert, but the defense needs to be reconstructed.

“I think we’re going to learn on our offense early in the year to carry the mail,” Miami coach Chuck Martin said. "I think by the middle of the year, our defense will be pretty salty. But we’re going to have some young bucks out there early, and it will take some time to get some seasoning.”

With 35-year-old coach Sean Lewis starting his fifth season by chasing a fourth consecutive winning season and a third bowl appearance, his players are motivated to steal the title of top dog after splitting last year's two games with the Huskies.

“I’m going to live with that forever," Cephas said, referring to Kent's 41-23 title game loss. “This year, I hope we can make it, get it back to where it was and take it home.”

It's not just the champions that change almost annually in the MAC. Over the past nine years, every team except Eastern Michigan has appeared in the title game and and nine schools have won league titles since 2005. The other three have waited decades to celebrate.

Eastern Michigan has been to four bowl games in the past five years under coach Chris Creighton but won its only title in 1987. Kent State's last MAC crown came in 1972. Ohio was a regular contender until last year's coaching change. The Bobcats' drought dates to 1968.

From new Akron coach Joe Moorhead to Central Michigan's Lew Nichols' pursuit of 2,000 yards, there are plenty of intriguing storylines around the league.

Two others are worth watching: The return of Miami linebacker Ryan McWood, who starts his seventh season, and Damian Jackson, a 30-year-old defensive end at Buffalo who spent five years at Nebraska after four with the Navy SEALs.

At least one conference team has beaten a Big Ten foe in a record 15 consecutive seasons.

Buffalo gets the first crack when it visits Maryland on Sept. 3. In Week 2, Akron visits Michigan State while Ohio travels to Penn State. Toledo plays at Ohio State on Sept. 17.

But the toughest schedule goes to Kent State, which opens at Washington and at Oklahoma before a Week 4 contest at Georgia.