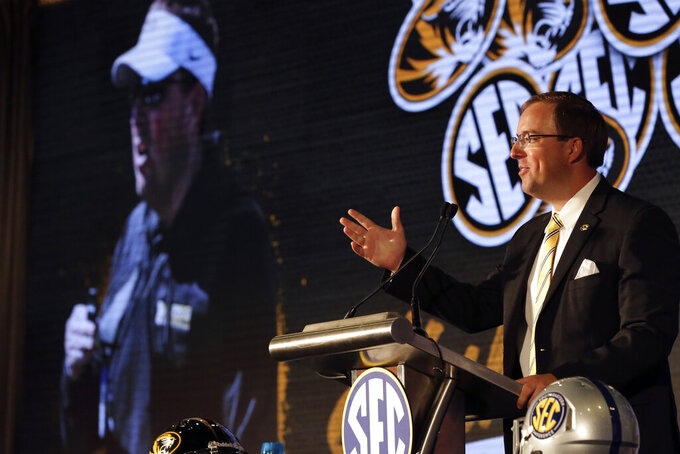 Expectations surrounding Missouri in its first go-around under Eli Drinkwitz were predictably modest, a byproduct of both the backpedaling the program had done under Barry Odom and the problems COVID-19 caused to the entire season.

Most bystanders would argue the Tigers shattered them.

Sure, they went just 5-5 and did not appear in a bowl game, though they would have been eligible. But they did so against a brutal SEC-only schedule and those five wins included one over defending national champion LSU, rivalry games against South Carolina and Arkansas, and Missouri's first win over Kentucky in five tries.

“We had a lot of positive momentum going into the offseason,” Drinkwitz acknowledged, “but we didn't meet the standard of what we want to be going forward.”

In other words, the standard Drinkwitz brought from Appalachian State is a whole lot higher, and that means expectations are certain to be higher when the Tigers take the field against Central Michigan for their opener Sept. 4.

“We're continually chasing that closing-the-gap mentality,” Drinkwitz said. “How do we close that gap to the upper echelon of SEC teams? It's not going to be easy. And we're not going to do it overnight.”

But the pieces are in place for another big step in the right direction.

Connor Bazelak is back under center after wresting control of the quarterback job from Shawn Robinson about five quarters into last season. Bazelak wound up completing 67% of his passes for 2,366 yards with seven touchdowns and six picks, and that was good enough to earn co-freshman of the year honors from the league's coaches.

Longtime running back Larry Rountree III is gone, but most of the offensive line is back and Bazelak still has plenty of tools at his disposal. Tyler Badie is one of the top returning backs in the SEC, and a deep bunch of wide receivers led by Tauskie Dove, Keke Chism and Ohio State transfer Mookie Cooper should give opposing defenses fits.

Speaking of defenses, the Tigers have basically revamped that entire side of the ball.

It began with the hiring of former NFL head coach Steve Wilks to coordinate the defense, and continued with new line coach Jethro Franklin. Then the transfer portal brought former Rice star Blaze Alldredge to solidify the linebacker spot, and plenty of other freshmen and transfers are poised to get into the mix this season.

“That was a weakness for us,” Drinkwitz said, “especially at the end of last season.”

WHERE HAVE YOU GONE, MR. ROBINSON?

After losing his starting QB job, Robinson was pressed into duty in the secondary late last season. He wound up staying on that side of the ball, and he is poised to back up incumbent strong safety Martez Manuel this season.

“I’m definitely just trying to be like a sponge, just learn from the guys who have been doing it for years," Robinson said, “and just try to learn little techniques, little intricacies that I don’t have right now added to my game.”

KOBIE OR NOT TO BE

Defensive lineman Kobie Whiteside could have entered the draft after last season, when an MCL injury caused him to miss most of his senior year. He had 7 1/2 sacks the previous season. But he chose instead to take advantage of rules put in place during the pandemic to return for an extra year of eligibility.

“I didn't want to leave Missouri without putting everything I could on the football field,” said Whiteside, who had surgery in January. “I knew that I needed to come back and I wanted to come back. I feel like I can do better as a leader.”

Bazelak and Manuel were voted team captains along with offensive guard Case Cook, who was a captain a year ago. “It means a lot, especially this being the second time,” he said. "I wouldn't be anything without these guys so for them to select me to be their leader and their captain, it’s probably the greatest honor you can receive as a member of a team.”

Harrison Mevis had one of the best seasons by a freshman placekicker in the country last season, connecting on 17 of 20 field-goal tries. Meanwhile, punter Grant McKinnis averaged 43 yards and kickoff specialist Sean Koetting knocked nearly nine of 10 kickoffs into the end zone for a touchback.

After the Tigers' first-ever meeting with Central Michigan, they dive straight into SEC play with a visit to Kentucky. It's not far-fetched to believe the Tigers could be 6-0 when Texas A&M visits Oct. 16. The schedule also includes trips to Georgia and Arkansas and home dates against Florida and South Carolina.