No. 1 Alabama hosts Southern Miss after toughest test so far 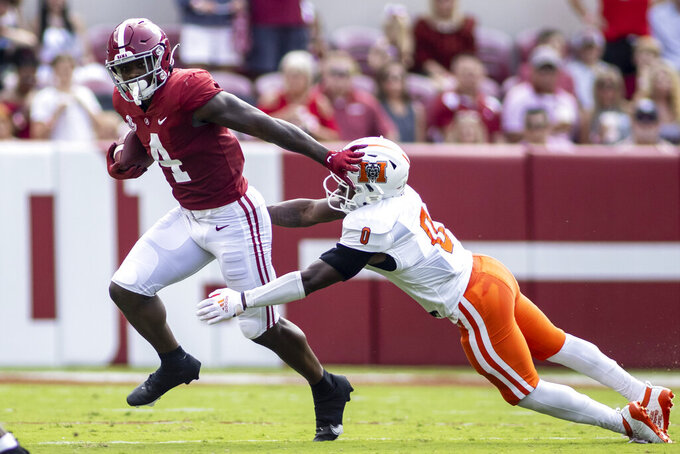 Alabama running back Brian Robinson Jr. (4) runs past Mercer defensive back Lance Wise (0) during the first half of an NCAA college football game, Saturday, Sept. 11, 2021, in Tuscaloosa, Ala. (AP Photo/Vasha Hunt)

Line: Alabama by 45 ½, according to FanDuel Sportsbook.

It's a sandwich game for Alabama between two ranked Southeastern Conference opponents, No. 11 Florida and No. 13 Mississippi. Southern Miss is looking to show progress under first-year coach Will Hall and perhaps pull off a huge upset.

Alabama’s running game hasn’t really gotten going consistently so far this season, but there’s abundant talent in the backfield and on the offensive line. The Southern Miss defense has held its last three opponents below 100 rushing yards — including 49 against Troy.

Southern Miss: Freshman QB Ty Keyes is expected to make his second start with Trey Lowe recovering from a left leg injury. Keyes passed for 157 yards but was intercepted twice in his starting debut against Troy. Lowe, a West Virginia transfer, is the grandson of three-time Alabama All-American Woodrow Lowe.

Alabama: RBs Brian Robinson Jr., Jase McClellan and Trey Sanders. The Tide running backs combined for 24 carries for 95 yards against Florida, all courtesy of Robinson and McClellan. They both also caught touchdown passes in the game but would like to get the ground game going again.

Southern Miss has only faced a single top-ranked opponent in the AP poll, losing to No. 1 Alabama 42-7 on Oct. 25, 1980. The Golden Eagles’ last win in Tuscaloosa came in the campus finale for Tide coaching icon Bear Bryant in 1982. ... All the Southern Miss-Alabama games have been played in the state of Alabama. Alabama has won seven straight and 15 of the last 16. The Golden Eagles’ last win in the series was 21-0 in 2000. .. A win would be the Tide’s 100th straight against unranked teams, adding to their own FBS record. ... Alabama narrowly kept one streak alive in that 31-29 win over Florida. The Tide have scored at least 30 points in 29 consecutive games, two shy of UCF’s FBS record set from 2017-19. ... Alabama defensive coordinator Pete Golding was the defensive backs coach for the Golden Eagles in 2014-15.