No. 11 Penn State looking to finish strong against Spartans 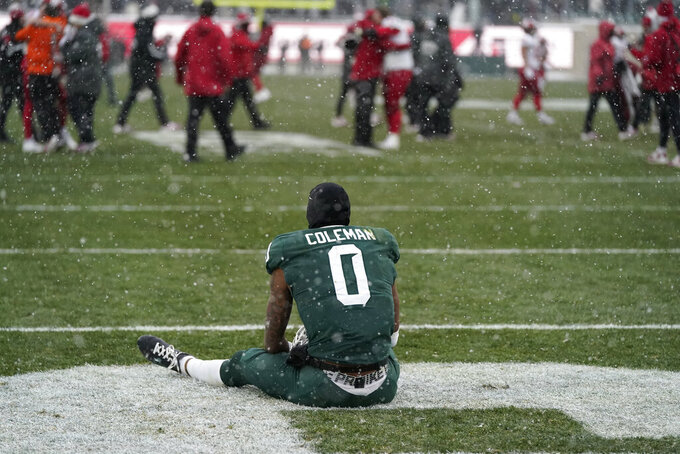 The Nittany Lions have looked like a team that belongs in a New Years Six bowl game over the last few weeks. They still have chance to get in one and earn coach James Franklin his fourth 10-win season in Happy Valley. The Spartans need this one to become bowl eligible.

Michigan State’s rush defense vs. Penn State’s run game. The Nittany Lions have had their way with their last three opponents on the ground. They’re averaging 222 rushing yards per game since Oct. 29 and have scored nine touchdowns.

Michigan State: LB Cal Haladay. He averages 9.9 tackles per game, tied for most in the Big Ten. Haladay had a Big Ten-high 19 tackles in a win over Rutgers earlier this month, and might need to have a similar performance to help the Spartans pull off an upset.

Penn State: RB Kaytron Allen. Pick either of Penn State’s talented true freshman backs. While Nick Singleton is the bigger threat, Allen has been a bulldozer. He’s tough to tackle and is the player the Nittany Lions call upon to wear defenses down early.

The Washtenaw County Prosecutor’s Office authorized charges against seven suspended Spartans. Cornerback Khary Crump was charged with a felony for assault and six other players, including standout linebacker Jacoby Windmon, face misdemeanor assault charges. ... The Spartans have won six of the last nine games in the series, including three of their last five at Penn State. ... Michigan State WR Keon Coleman ranks among Big Ten leaders with seven TD receptions, 64.3 yards receiving per game and 50 catches. He had his third 100-yard game of the season against Indiana. ... Spartans QB Payton Thorne has thrown 18 TDs and 10 INTs, a year after he threw 27 TDs and 10 INTs. ... Michigan State’s Bryce Baringer is one of 10 semifinalists for the Ray Guy Award, which recognizes college football’s top punter. … Penn State RBs Kaytron Allen and Nick Singleton are the first freshman duo in the Big Ten to rush for 700-plus yards each in a season. … Franklin won his 100th game as head coach last week. … Twenty-six Nittany Lions have recorded at least one tackle for loss this season, most in the FBS. … Penn State scored three non-offensive TDs last week.