No. 13 Wake Forest aims to keep rolling vs. Boston College 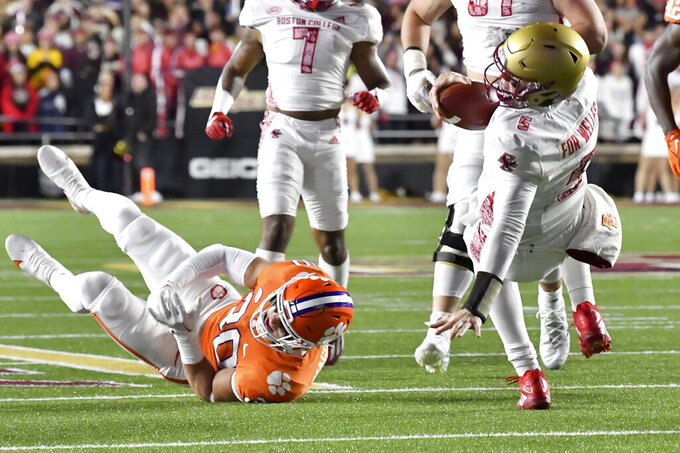 Boston College quarterback Phil Jurkovec, right, falls to the turf, next to Clemson's Keith Maguire during the first half of an NCAA college football game Saturday Oct. 8, 2022, in Boston. (AP Photo/Mark Stockwell)

Wake Forest had regrouped from its only loss with a pair of strong performances when its off week arrived. The 13th-ranked Demon Deacons must pick things back up, starting with Saturday's visit from Boston College.

The Demon Deacons (5-1, 1-1 Atlantic Coast Conference) responded to a crushing double-overtime loss to No. 5 Clemson by winning at Florida State. Then came a home win against Army in which they surrendered just 10 points against the triple-option run attack after giving up 56 the year before.

“In some ways I felt like the last three weeks we probably played really good football," coach Dave Clawson said. "And when you're playing well, you don't necessarily want a break but I think it was as good as much mentally for our players as physically.”

The goal going forward is to stay within reach of Clemson in the league's Atlantic Division race, though the Demon Deacons are also flirting with cracking the top 10 of the AP Top 25 for a second straight season.

The mission is different for the Eagles (2-4, 1-3). They're coming off their own loss to Clemson before an open date, though their offense has sputtered to 14 or fewer points in all three of their league losses.

BC coach Jeff Hafley said the bye week was “not as productive as you want it to be because you’re so banged up.”

“Usually you have a bye and you have time to recover,” he said. “But we’ve had so many guys that have had season-ending surgeries, where the bye doesn’t matter.”

The Demon Deacons are 14th in the Bowl Subdivision in averaging 41.2 points, and their 247 points are the most through the first six games in program history. Wake Forest has scored at least 31 points in every game behind quarterback Sam Hartman.

Boston College has surrendered a league-worst 22 sacks this season, including 20 of starter Phil Jurkovec behind an injury-hit offensive line. Only three power conference teams have surrendered more: Texas Tech (23), Kentucky (26) and Washington State (26).

The Eagles also can’t afford the breakdowns that allowed Clemson to strike quickly.

Three times, the Tigers took over in BC territory, including a drive that started at the Eagles 28 after a 20-yard punt return. Another began at BC’s 23 after Jurkovec tried to lateral the ball rather than take a sack.

“Playing well against this offense is more than about just our defense playing well,” Hafley said. "We need to force them to drive the length of the field, and in order to do that we need everybody.”

Boston College was hit with a wave of the flu before last year’s game against Clemson with 32 players falling ill during the week. Fifteen of them, including Jurkovec, were out on the previous Wednesday, forcing the team to hold a walkthrough instead of a regular practice.

Ten players missed the game that the Demon Deacons won 41-10 to clinch the division race.

“It was kind of like our flu game,” Hafley said. “But it didn’t go like (Michael) Jordan’s flu game, obviously.”

Hafley said he got his flu shot Monday.

“So, besides a sore arm, I hope I don’t get the flu before this game,” he said.

Clawson said Wake Forest's list of off-week work included getting better at defending the deep ball in the air and “attacking it at the high point." The Demon Deacons have surrendered 14 passing touchdowns, second only to North Carolina's 18 in the ACC.

That could be a key against BC receiver Zay Flowers, who leads the ACC in catches (42) and receiving yards (556) to go with five touchdowns. He had TD grabs of 57 and 69 yards in the loss to Louisville on Oct. 1.

“If you're watching us on film, I'm sure that's something people are going to keep doing it until we show we can consistently defend it," Clawson said.