No. 14 Washington St provides tough test for No. 24 Stanford 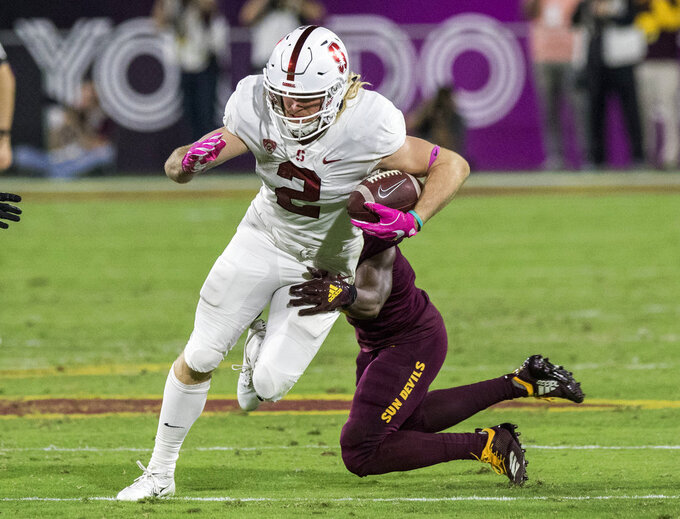 STANFORD, Calif. (AP) — It's never been particularly easy to defend the Air Raid offense that Mike Leach has been running for two decades at several schools.

The version he has now at Washington State is particularly challenging and is a major reason why the 14th-ranked Cougars (6-1, 3-1 Pac-12) are having so much success this season heading into Saturday's showdown at No. 24 Stanford (5-2, 3-1).

"What Mike Leach has done in the last three years has been undersold nationally," Cardinal coach David Shaw said. "I'm not just saying that because we're playing them this week. The variety he gives you between quick passes and down the field passing, all the crossing routes, mixing in a draw, mixing in a running back screen, mixing in a receiver screen. Mixing in his funky formations. Started shifting. Mike Leach never shifted before a few years ago. Now he's shifting periodically. He's doing a lot of stuff to keep you off balance. It's the variety of different ways he's getting guys open."

That offense led by transfer quarterback Gardner Minshew leads the nation in passing with 400.7 yards per game and is a major reason why the Cougars have started 6-1 for a second straight season and are the only team in the Pac-12 with less than two losses.

Remaining the sole one-loss team will be tough against the Cardinal, who have undergone a bit of a transition on offense as well, out of necessity rather than choice.

Lacking the dominant offensive line that fueled a running attack the past decade with stars like Toby Gerhart, Stepfan Taylor, Christian McCaffrey and current lead back Bryce Love, Stanford has been forced to rely on quarterback K.J. Costello and the passing game.

That has led to more inconsistency than usual in the offense but the Cardinal still remain in contention for a Pac-12 title.

"They are throwing it a bunch now," Leach said. "It's a little different dimension. Offensively it's a different Stanford team than we've played."

LOVE'S STRUGGLES: Love has been nursing an ankle injury for much of this season and has already missed two games but the Cardinal are hopeful he can play Saturday. Whether he can get back to last year's level is another question. Love has 348 yards on 87 carries this season, down from 1,014 yards on his first 87 carries last season. The difference of 7.7 yards per carry is more than most backs could hope for as their season total.

AVOIDING SACKS: Minshew has been sacked just five times in seven games this season, tied for fifth-fewest among FBS teams. Minshew wasn't sacked at all in games against Wyoming, San Jose State, Oregon State and Oregon. The Cardinal have 19 sacks so far this season.

"This kid has active feet," Shaw said. "He's very quick. He gets out of trouble. He moves around to bide time. I think he's a perfect fit with what Coach Leach does with him being a quick decision maker."

HIDDEN GEM: Stanford receiver JJ Arcega-Whiteside gets most of the attention with nine TD catches this season. But his running mate, Trenton Irwin, is almost as important to the Cardinal offense, with catches in 35 straight games. He has 34 catches for 363 yards overall this season, including back-to-back games with seven apiece.

"I think Trent has been phenomenal," Shaw said. "He's been awesome on third downs. He's made big plays down the field, made game-changing plays, he's given us everything he's got."

BACK TO BACK: The Cougars are coming off an emotional 34-20 win over then-No. 12 Oregon. ESPN's "College GameDay" came to campus for the first time and fans stormed the field in celebration. Washington State has had several big wins over the years, including two years ago at Stanford. But the Cougars haven't beaten ranked teams in back-to-back games since toppling Arizona State and Oregon in successive weeks in November 2002.