No. 15 Michigan St. opens season of promise vs W. Michigan 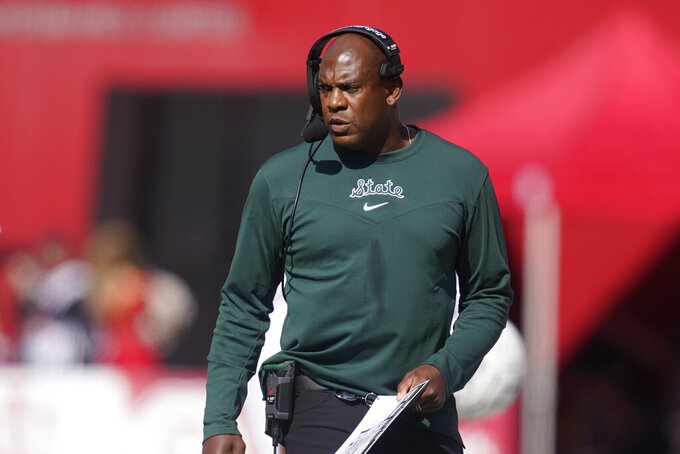 File - Michigan State head coach Mel Tucker watches the second half of an NCAA college football game against Indiana, Oct. 16, 2021, in Bloomington, Ind. Tucker, entering his third season with the Spartans, knows what it takes to win it all. He did it as an assistant on championship-winning coaching staffs at Alabama in 2015 and with Ohio State in 2002. (AP Photo/Darron Cummings, File)

Michigan State has quickly changed the conversation about its football program.

The Spartans are ranked No. 15 in the preseason AP Top 25 going into Saturday's home game against Western Michigan. A year ago, Michigan State was unranked and overlooked following coach Mel Tucker's 2-5, pandemic-shortened debut season as Mark Dantonio's successor.

“We were picked to be one of the worst five teams in the country," Tucker recalled.

Tucker turned it around last year by improving the players he had and adding an influx of transfers, including former Wake Forest running back Kenneth Walker III, and finished with 11 wins and a ranking of No. 9.

“The expectations from the outside have really ramped up," Tucker said.

Tucker's top tasks this season are replacing Walker, now a rookie with the Seattle Seahawks, and improving how the team defends the pass.

Walker ranked second in the FBS last season with 1,636 yards rushing and was among the nation’s leaders with 19 touchdowns. A pair of transfers are trying to fill his shoes, along with some returning players hoping to at least be in the running back rotation.

Transfers Jarek Broussard (Colorado) and Jalen Berger (Wisconsin) are competing for carries with Elijah Collins, who ran for 988 yards in 2019 under Dantonio, among others.

“Jarek is very electric and shifty, you can think he’s bottled up and he breaks out for a big play," Michigan State linebacker Darius Snow said. “Jalen is a little bigger, and he's got great speed and vision."

Tucker took over coaching the team's cornerbacks and added Georgia transfer Ameer Speed to bolster a secondary that gave up 324.8 yards through the air last year.

“The head coach is trying to improve a weak spot," fifth-year senior safety Xavier Henderson said. “It just shows you how bad he wants to win."

The Broncos are led by one of their former quarterbacks, Tim Lester, who is 32-25 in five seasons. Lester won his first of three bowl games last year in a 52-24 rout against Nevada in the Quick Lane Bowl.

Western Michigan return eight starters on defense and four on offense from last year’s team that was 8-5 overall and 4-4 in the Mid-American Conference.

Michigan State is expected to beat the Broncos by three touchdowns, but Tucker knows his team will get their best.

“My experience tells me in games like this, this game has been circled on their schedule for quite some time,” he said. “Whatever we’ve seen from them on tape, they’re going to be better than that.”

Western Michigan has a slew of in-state players, none of whom were offered scholarships at Michigan State.

“I definitely think they know who recruited them and who didn’t,” Lester said. “I think they take more pride in Western Michigan and what we can do than trying to settle a grudge."

Michigan State quarterback Payton Thorne, who broke a school record with 27 touchdown passes last season, will be facing his father at Spartan Stadium.

Lester hired Jeff Thorne to be his offensive coordinator this season after he led North Central College in Illinois to the 2019 Division III national championship during a six-year run that included 65 victories.

Western Michigan is expected to start Jack Salopek at quarterback. The redshirt freshman was 3 for 3 for 20 yards in the win at Pittsburgh last season, filling in for injured Kaleb Eleby.