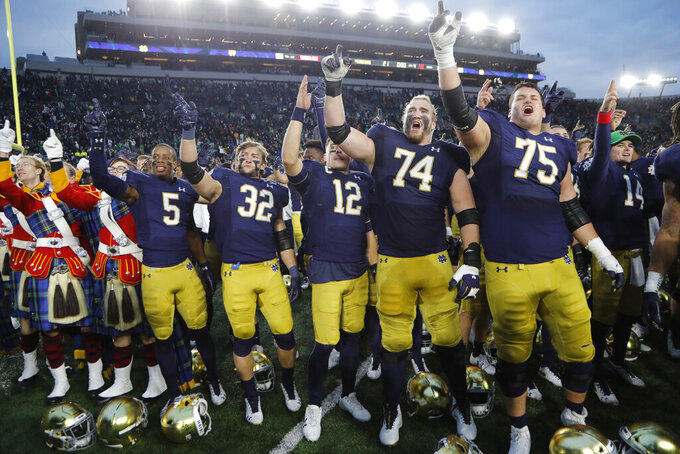 DURHAM, N.C. (AP) — No. 15 Notre Dame found a way to finally win a close game. Duke hasn't had much success doing that.

The Fighting Irish (6-2, No. 15 CFP) visit the Blue Devils (4-4) on Saturday night in a game neither team can really afford to lose.

With two losses, Notre Dame is out of the College Football Playoff discussion but a spot in a New Year's Six bowl is very much a possibility. But for that to happen, the Irish keep winning and climbing up the selection committee's rankings.

After bouncing back from a sloppy loss at Michigan with a last-minute victory over Virginia Tech, the Irish have a manageable schedule the rest of the way and shape up as favorites in each of their final four games.

"I don't know why, but it seems like if you win it's a little quieter," coach Brian Kelly said. "We are going to continue to try to do that. Our preparation will be such that we've got our players understanding what it takes to prepare and play the right way. We'll build off that and go have some fun."

It's been tougher lately for the Blue Devils, who have lost two straight and need to win two of their final four games — next up are Syracuse, No. 22 Wake Forest and resurgent Miami — to qualify for their third straight bowl game.

Either way, they'll no doubt rue the ones that slipped away.

Only two of Duke's games have been decided by fewer than 18 points and the Blue Devils lost them both in the closing minutes, losing 33-30 to Pittsburgh and most recently falling 20-17 at rival North Carolina when a tailback jump pass was intercepted at the goal line. Duke used its off week to put the sting of that loss in the past.

"You use it as fuel," coach David Cutcliffe said. "You don't let it eat you up under any circumstances, and so we put that to rest during the open date."

Some things to know about the Notre Dame-Duke game:

Duke has 19 turnovers and 17 have come in its four losses, including five in a 48-14 loss at Virginia and three against the Tar Heels. Notre Dame is tied for 10th nationally with a turnover margin of plus-7, and has turned it over multiple times in only three games — losses to Michigan and Georgia, and that closer-than-expected win over Virginia Tech.

Kelly says QB Ian Book has maintained a high level of confidence despite an up-and-down season. Book shrugged off two interceptions last week and led an 18-play, 87-yard drive that he capped with a 7-yard touchdown run with 29 seconds left to beat the Hokies.

"If you lose your confidence here as a quarterback you can't play quarterback at Notre Dame," Kelly said. "There is just so much noise. ... Although it's difficult for everybody when you don't play particularly well, when you don't play particularly well, we felt like he had what it took to stand up to that. You know, he did, and he's come out on the other end and should be better for it."

Notre Dame has barely had RBs Tony Jones and Jafar Armstrong fully healthy together all season, with Armstrong working his way back after tearing an abdominal muscle in the opener at Louisville and Jones missing the Virginia Tech win with a rib injury he suffered at Michigan.

"It would be great if Tony is ready to go and we expect him to," Kelly said. "We will get them both in the lineup and they both can contribute and be helpful for us. Be nice to have them."

Notre Dame's top two receivers — WR Chase Claypoole and TE Cole Kmet — both are 6-foot-5½ and they present matchup problems for a Duke secondary that has only one starter who is even 6-1. The Blue Devils' cornerbacks typically play high-pressure, man-to-man defense on those wideouts and Cutcliffe says the key to limiting those targets starts at the other positions.

"First of all, you have to find a way to generate some pass rush," he said. "You've got to make the quarterback uncomfortable about holding the ball."