No. 17 Pitt can cement its spot as Coastal leader vs. Miami 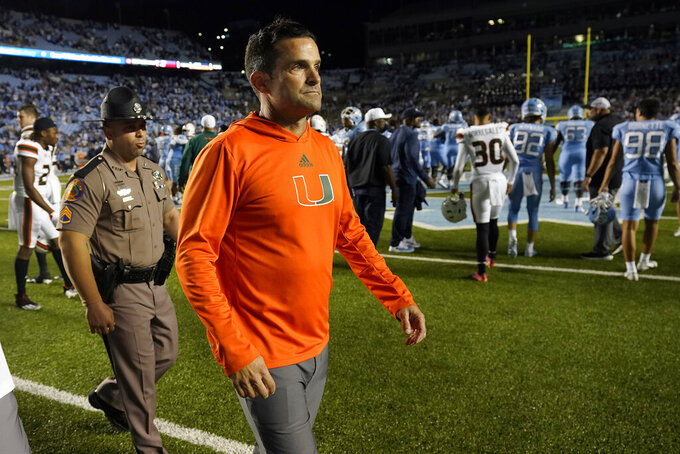 Line: Pittsburgh by 9 1/2, according to FanDuel Sportsbook.

Pitt can further stamp itself as the heavy favorite in the Coastal Division by backing up last week's win over Clemson with a victory over the Hurricanes. The Panthers are the only Coastal team undefeated in conference play. Every other club has at least two ACC losses, including the Hurricanes. Miami will attempt to prove last week's upset over N.C. State was the start of something and not just a fluke.

Miami's secondary against Pitt QB Kenny Pickett. Pickett has mounted a darkhorse Heisman Trophy candidacy that is picking up steam each week. He's thrown for 23 touchdowns against just one interception and became Pitt's all-time leader in pass completions last week against Clemson. Miami's secondary gave up 310 yards and two scores in a narrow win over N.C. State last Saturday and will play without leading tackler Bubba Bolden, who is out for the season with a shoulder injury.

Miami: QB Tyler Van Dyke. Thrust into a starting role thanks to a season-ending shoulder injury to D'Eriq King, the freshman seems to be growing in confidence with each passing game. He threw for 325 yards and four touchdowns against the Wolfpack while completing 25 of 33 passes.

Pitt: TE Lucas Krull. The graduate transfer from Florida has five touchdown receptions, ranking in the top five in his position nationally. His size (6-foot-6 and 260 pounds) has made him a prime red-zone target for Pickett. He'll face a middling Miami defense that's allowing a staggering 35.0 points per game in conference play, second-worst in the ACC behind Duke (39.0).

The Hurricanes have won each of the last three meetings by an average of 12.3 points. ... Miami is 15-6 all-time on the road against Pitt and 6-2 at Heinz Field. ... Miami RB Jaylan Knighton posted a career-high 166 all-purpose yards in their victory over N.C. State (83 yards receiving, 83 rushing). ... The Panthers have their highest in-season ranking since 2009. Pitt can match the 7-1 start by that group with a victory. ... Pickett needs 166 yards of total offense to break Alex Van Pelt's school record of 11,148 yards set from 1989-92. ... Pitt WR Jordan Addison's 10 TD receptions are tied for most in the nation. Addison and RB Izzy Abanikanda are both questionable after entering concussion protocol last week.