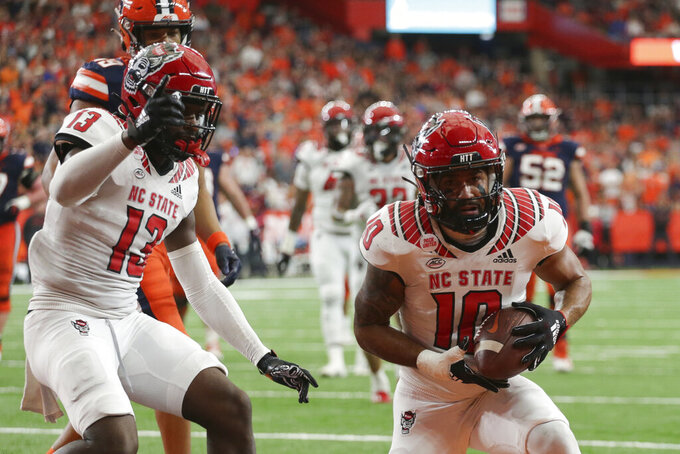 North Carolina State safety Tanner Ingle (10) and defensive back Tyler Baker-Williams (13) celebrate after an interception by Ingle during the first half of an NCAA college football game against Syracuse, Saturday, Oct. 15, 2022, in Syracuse, N.Y. (AP Photo/Joshua Bessex)

SYRACUSE, N.Y. (AP) — When it was over Syracuse coach Dino Babers stood near a goalpost and watched as the home crowd descended onto the field in celebration of a significant win.

“It was something that was extremely special,” Babers said after his Orange had won their sixth straight game to open the season. “It's amazing what people can do when they all stay together and they don't care who gets the credit.”

Garrett Shrader hit Oronde Gadsden II with a pair of touchdown passes, Sean Tucker scored on a 25-yard run late, and No. 18 Syracuse beat No. 15 North Carolina State 24-9 on Saturday to remain unbeaten and become eligible for the postseason.

Syracuse (6-0, 3-0 Atlantic Coast Conference) started a season with six wins for just the third time since 1935, taking advantage of the absence of the Wolfpack's injured star quarterback, Devin Leary. Hurt last week in a win over Florida State, Leary was declared out for the rest of the season before the game. The preseason conference player of the year suffered a torn pectoral muscle and will undergo surgery next week in Florida. He’s expected to make a full recovery.

The Orange took the opening kickoff and scored in short fashion, driving 65 yards in five plays in just 2:04 . Tucker’s 38-yard run set up Shrader’s 12-yard touchdown pass to Gadsden, his fourth scoring catch of the season.

That put North Carolina State (5-2, 1-2) in a bad place early with Charleston Southern graduate transfer Jack Chambers making his first start at quarterback. Syracuse outgained N.C. State 113-55 in the first half and the Orange's 10-3 lead at the break almost seemed too much to overcome in front of a raucous, sellout crowd in the newly renamed JMA Wireless Dome.

Still, Chambers got the Wolfpack rolling on the first possession of the second half. He hit Christopher Toudle for 21 yards on a third-and-10 play and an 8-yard completion to Thayer Thomas moved the ball to the Syracuse 12. But a bad snap and a false start penalty on consecutive plays forced the Wolfpack to settle for Christopher Dunn's 22-yard field goal.

“I thought Jack played hard and he did some good things,” N.C. State coach Dave Doeren said. “At times it was very difficult for him with that noise and the pressures they were bringing. He made a lot of plays with his legs for us today, didn’t turn the football over, and showed good poise, didn’t get rattled, so he can definitely grow from that game.”

“I felt like the whole time I was relaxed and ready to go,” added Chambers, who finished 18-of-29 passing for 160 yards, rushed for 68 yards on 19 carries and was sacked three times. “It just didn’t work out the way I wanted it to.”

Shrader's 17-yard scoring pass to Gadsden late in the third boosted the Syracuse lead to 17-6 and the Wolfpack couldn't answer as Chambers, who had moved the team to the Orange 8-yard line, was sacked leading to a third field goal.

Tucker’s touchdown run came with just over 2 minutes left to ice the game.

The Orange entered the game allowing 14 points and 271.6 yards per game, just ahead of the second-place Wolfpack (15.7 and 297.8). N.C. State's defense kept the Wolfpack in this one for a while, intercepting Shrader on consecutive possessions in the second quarter but could not hold up throughout as they allowed 389 yards to the Orange.

Syracuse entered the game having scored on 23 of 24 trips in the red zone. But with Syracuse poised to take a 17-3 lead late in the second quarter, Shrader suffered his second interception of the season when Tanner Ingle picked him off in the end zone after Syracuse had driven to N.C. State 14. It was the 10th interception of the season for the Wolfpack defense and it rose to the occasion again the next time Syracuse had the ball. Aydan White picked off a Shrader throw along the right sideline deep in N.C. State territory to keep the score 10-3 at halftime.

Syracuse moved up four spots during its bye week, its three victories over Power Five teams a factor in its rise, and likely will move a bit higher.

Syracuse honored three of its greatest players during halftime. Running backs Jim Brown, Heisman Trophy winner Ernie Davis, and Floyd Little, who each wore the Orange’s famed No. 44, were enshrined in the school’s Ring of Honor. Tucker, who finished with 98 yards rushing on 14 carries, moved past Little for sixth on the school's all-time rushing list with 2,766. Little, who died last year, had 2,704.

North Carolina State: The Wolfpack have a bye next week, which will give coach Dave Doeren time to make adjustments to his offense with the loss of Leary.

Syracuse: Notching its sixth win removes any doubt about the postseason. Last year's team finished 5-7 after losing its final three games. Syracuse had lost a key player in each of the first five games and standout defensive back Garrett Williams was hurt in the second quarter and was helped off the field. The Syracuse defense has given up more than 20 points only once so far this season.

North Carolina State: The Wolfpack have a bye before hosting Virginia Tech on Thursday night, Oct. 27.

Syracuse: The Orange are at No. 4 Clemson next Saturday.