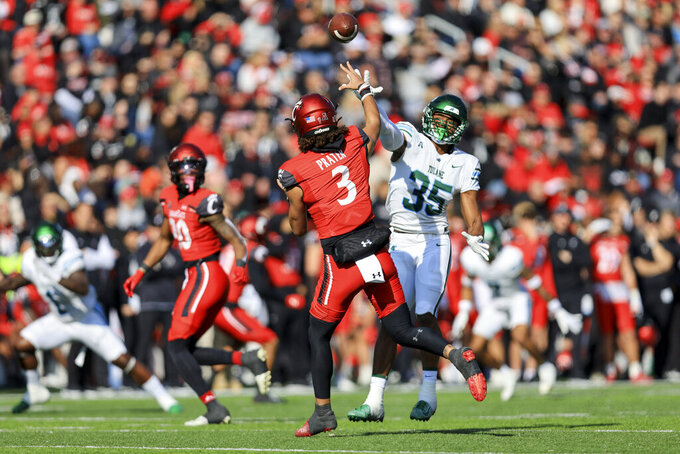 Cincinnati quarterback Evan Prater, left, throws a pass as he is pressured but Tulane linebacker Jesus Machado during the first half of an NCAA college football game, Friday, Nov. 25, 2022, in Cincinnati. (AP Photo/Aaron Doster)

CINCINNATI (AP) — Michael Pratt found Duece Watts with a 30-yard touchdown pass with 5 minutes left to lead No. 19 Tulane to a 27-24 win over No. 24 Cincinnati on Friday, making the Green Wave the hosts for the upcoming American Conference Championship game.

Tulane also snapped a 32-game home streak for the Bearcats (9-3, 6-2), who now must wait for the outcome of Saturday's UCF game to know whether they'll be in the conference championship, too.

“I told Tyjae we were going to ride him and we did,” Tulane coach Willie Fritz said. “I'm proud of the guys and the adversity we went through against one of the best defenses in the country."

Pratt went 13-for-22 passing for 162 yards and the winning touchdown. He also rushed for 30 yards on nine carries. Fritz said Pratt was “really sharp” on the final drive, and noted that Pratt had played all last season with with an injury he sustained in the first game of that 2-10 campaign.

Redshirt sophomore Evan Prater started at quarterback for Cincinnati in place of Ben Bryant, who suffered a foot injury in the win over Temple. Overall, Prater was 10-for-26 for 102 yards and rushed for 83 yards on 18 carries.

But he was intercepted by Dorian Williams on a tipped pass to Devean Deal midway through the third quarter. Bryon Threats was flagged for pass interference on a fourth-and-3 pass attempt to set up Spears' two-yard touchdown run.

“I thought Evan did a great job,” Cincinnati coach Luke Fickell said. “I didn't look at the stats just yet. I know he's heartbroken. He's crushed. ... we talk about taking care of each other but putting him in a situation with a minute-30, a minute-40 and no timeouts is not taking care of him. He played with poise. He played with a lot of confidence.”

Tulane had a 13-10 lead at halftime after Valentino Ambrosio kicked a 47-yard field goal with 21 seconds left. The kick followed a 28-yard pass from Pratt to Lawrence Keys III, which was ruled a touchdown on the field as Keys appeared to roll over Arquon Bush for a 58-yard score but overturned when replays showed Keys' knee touched the turf.

“This is a tough one to swallow,” Fickell said. “It wasn't from lack of preparation but we didn't get it done today. We wanted to send our seniors out the right way. Tulane is similar to us. They grind it out they're aggressive. They did a better job than we did of not giving up the big play."

Tulane: Has something special in Spears, who passed the 1,000-yard mark for the season with 103 yards in the first half. He leads the AAC in touchdowns with 16.

Cincinnati: Missed its bid to win three consecutive AAC regular-season championships in its final three years of membership. The Bearcats move to the Big 12 Conference next season.

The Green Wave will likely move up with the win.

Cincinnati: Awaits their fate, which depends on the outcome of the UCF-South Florida game on Saturday. If UCF wins, it will be tied with Cincinnati in the conference standings — and holds the tiebreaker because UCF beat the Bearcats on Oct. 29.

This story has been corrected to show that Duece Watts caught the touchdown in the fourth quarter.