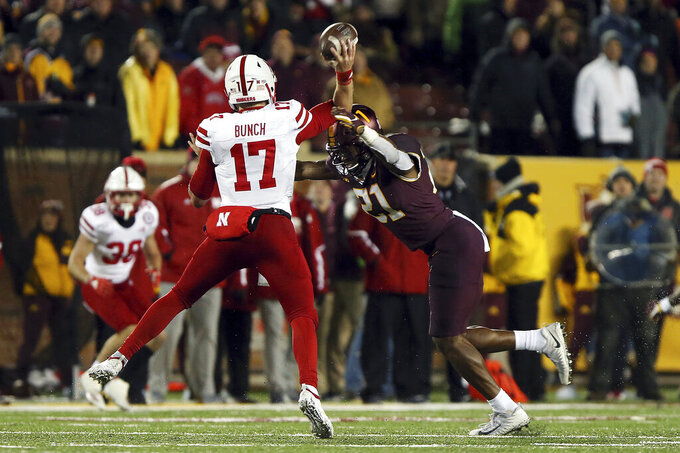 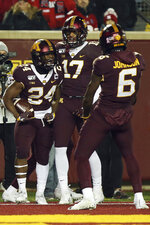 Minnesota is riding an eight-game winning streak, tying the school's longest since 1948-49. Going for first 7-0 start since 1960. It has secured a post-season bowl berth. It has won consecutive conference games by at least 20 points for the first time since 2005. After Rutgers, the Gophers return home to face Maryland. No. 7 Penn State up next at home Nov. 9. The season can't end soon enough for Rutgers.

Minnesota's offense against Rutgers' defense. The Gophers have won their last two conference games by a combined margin of 74-24. Rutgers has been outscored 165-7 in its four Big Ten games this season.

Minnesota: LB Kamal Martin. The senior had a career-high 15 tackles against Nebraska last weekend and was named the conference defensive player of the week. Leads Gophers with 41 tackles.

Rutgers: P Adam Korsak. The Scarlet Knights don't have much. The former Australian Rules Football player is third in the conference and 19th nationally with a 45.4 yard average. Twenty of his 41 punts have been downed inside the 20-yard line. He has only one touchback.

Minnesota won 34-32 in 2016 in the only meeting. ... Rodney Smith is third in the league in rushing, averaging 112.5 yards for Minnesota. ... Minnesota QB Tanner Morgan has thrown five of his 14 TD passes to Tyler Johnson. ... Morgan's pass efficiency average of 195.1 is best in the league and fourth nationally. ... Minnesota coach P.J. Fleck was a Rutgers' receivers coach in 2010-11 under Greg Schiano. ... Scarlet Knights special teams coordinator/outside linebackers coach Vince Okruch spent seven seasons on Minnesota's coaching staff. ... Rutgers last faced an opponent with a 6-0 record or better on Oct. 24, 2015 (No. 1 Ohio State, 7-0). They lost 49-7. Rutgers is averaging 65.3 yards in penalties, second worst in the conference.

By John Coon 55 minutes ago
By Tim Booth an hour ago
By David Brandt an hour ago
2 hrs ago
By Anne M. Peterson 2 hrs ago