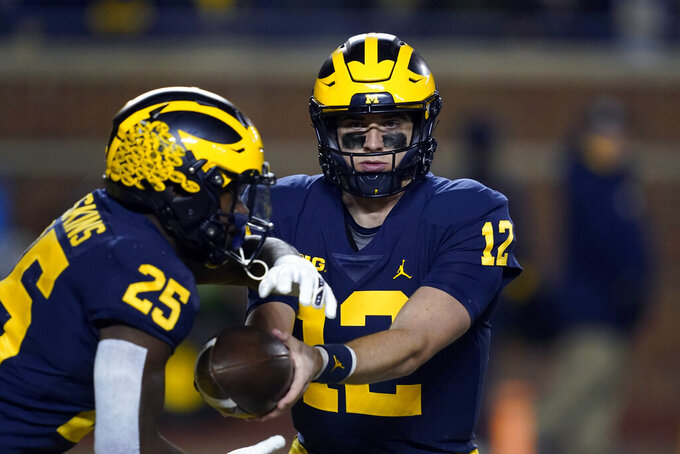 Michigan quarterback Cade McNamara (12) hands off to running back Hassan Haskins (25) during the first half of an NCAA college football game against Indiana, Saturday, Nov. 6, 2021, in Ann Arbor, Mich. (AP Photo/Carlos Osorio)

At this point in the season, with three games left, the No. 23 Nittany Lions aren’t worried about trying to kickstart a stagnant running game by giving their quarterback more carries. They’re content to rely on his arm and star wideout Jahan Dotson.

They’re not going to change against No. 9 Michigan (8-1, 5-1 Big Ten, No. 6 CFP) on Saturday when both teams begin their final stretch runs at Beaver Stadium. For the Wolverines, that could include a shot at the Big Ten championship. Although Penn State's title aspirations evaporated after an 0-3 stretch last month, the Nittany Lions (6-3, 3-3) want to finish strong, too.

Generating some attention for their best player would be a nice bonus.

Dotson and the rest of Penn State’s receiving corps have helped move the chains all season despite of one of the country’s worst rushing games. The Wolverines, on paper, appear to be their biggest test yet. They’re second in the Big Ten and eighth nationally in passing defense, allowing just 184 yards per game.

While Clifford has run for just 128 yards after combining for more than 700 in his first two seasons, he's going through his reads more and found additional weapons in the passing game.

“I feel extremely confident in the pocket right now, getting a lot of protection, guys are getting open downfield,” Clifford said. “I’ve also grown up a little bit and I’ve understood that standing in the pocket and waiting that extra maybe half second or two, there’s going to be guys coming open.”

Dotson is coming off a program record of 242 yards receiving against Maryland. He’ll be flanked by Parker Washington and KeAndre Lambert-Smith, who’ve also made plays in recent weeks. Washington’s done work in short yardage situations while Lambert-Smith is getting downfield at 15.5 yards per catch.

“I do think when people study us, it’s not a one-man show,” Franklin said. “I feel like they respect those guys on the field and obviously Parker has shown some flashes and KeAndre is almost there. And we need him.”

Penn State defenders know if they don’t slow the Wolverines’ top-ranked rushing offense, it could be a long afternoon.

Michigan is averaging 240 yards per game, best in the conference and seventh in the country. Led by Hassan Haskins, the Wolverines also like the hand the ball to Blake Corum. The two have already combined for 1,607 yards and 21 touchdowns on 295 carries.

However, Corum missed much of last week’s game with an undisclosed injury.

“Those guys that have been preparing, they’ve been working all season, and now comes their opportunity,” Harbaugh said.

Michigan quarterback Cade McNamara has been playing through an undisclosed ailment. Tight end Erick All is also banged up and missed last week’s game.

“Pain threshold,” Harbaugh said. “Some have it. Some have a very high pain threshold. It’s a very good quality. I know a real football player prides himself on it.”

The Wolverines have tried to embrace the energy of the crowd on the road, flipping the noise fans make in their favor.

“I’d say don’t fight against it, you go with it,” Harbaugh said. “Enjoy that stage. Enjoy that opportunity. Personally, I like to pretend they’re cheering for me when I was a player. I think I see our players taking that same mindset. Their music is our music.”

Michigan has a chance to potentially win its first Big Ten title since 2004 and end its longest drought without a championship. But the schedule won’t be easy.

After playing Penn State on the road, the Wolverines play at Maryland and host rival and sixth-ranked Ohio State. The Buckeyes have won a school-record eight straight and 15 of the last 16 games against the Wolverines.

“The last stretch is the most important three games,” guard Trevor Keegan said.