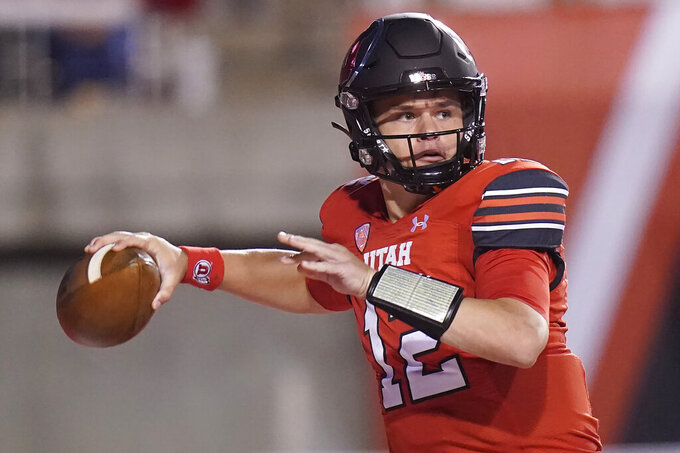 Brewer beat out Cameron Rising for the starting quarterback job in camp and did not disappoint. He was crisp on many throws and gave Utah a legitimate passing attack it lacked at times last season.

“I thought he was very poised in the pocket,” Utah coach Kyle Whittingham said. “He did a nice job keeping his eyes downfield. He was accurate. ... Did a good job of running the offense.”

Bronson Barron threw for 213 yards and a touchdown for Weber State, but the Wildcats had just 57 yards rushing.

“We did not do a good enough job of getting yards on the first down which put us in too many third and longs,” Weber State coach Jay Hill said.

Weber State took a 7-3 lead when Rashid Shaheed cut to the edge and returned a kickoff 100 yards untouched. He tied an FCS record with his sixth kickoff return for a touchdown.

The teams then retreated to the locker rooms with 8:26 left in the first quarter because of a lightning delay that lasted 90 minutes.

Utah marched down the field quickly after play resumed. The Utes covered 75 yards in five plays, culminating in a 17-yard pass from Brewer to Kincaid, to go back ahead 10-7. Brewer completed four passes on the drive, including three in a row to get Utah into the red zone.

Devin Lloyd snagged a tipped ball at the Weber State 31 to set up a 12-yard touchdown run from Thomas that extended Utah’s lead to 19-7 in the second quarter.

Lloyd had 12 tackles, a forced fumble and a sack to go along with that interception.

“We had been in worse situations I felt like and came back,” Utes cornerback Clark Phillips III said. “That was just a stumbling block we were excited to attack.”

Weber State had a chance to cut the deficit to five before halftime after mounting a 17-play drive and reaching the Utah 1. The Wildcats could not punch it in, coming up short on fourth down when Brandon McKinney stopped reserve quarterback Creyton Cooper for no gain.

“I do like the resilience and toughness of our football team, and I think we will get better,” Hill said. “This is a real team.”

The Utes shut the door on a potential comeback when Brewer connected with Solomon Enis on an 8-yard pass that made it 26-10 late in the third quarter.

It also shut the door on some early sloppiness on offense. Utah scored on two of its next three drives to put the game out of reach.

“It starts with me. I feel like I can play a little bit better,” Brewer said. “I thought it was a good starting point. Now we can kind of figure out what exactly we need to get better in.”

Weber State: The Wildcats dug a big hole after totaling 23 yards and committing a costly turnover on their first four drives.

Utah: Dropped would-be touchdown passes by T.J. Pledger and Cole Fotheringham forced the Utes to settle for a pair of field goals in the first half and opened the door for Weber State to stay within striking distance for three quarters.

Kincaid entered the game as a co-starter at tight end with Cole Fotheringham. His breakout performance may earn him a bigger role going forward.

The junior, who joined the Utes as a transfer from San Diego last season, caught a single pass for 14 yards a season ago. Whittingham believes he is poised to become a consistent playmaking threat on offense this year.

“Dalton Kincaid, I think is the best kept secret in the Pac-12,” Whittingham said. “He’s the whole package. He’s a weapon for us.”

Utah unveiled a banner over Portal 22 in the north end zone of Rice-Eccles Stadium between the first and second quarter. It now bears the acronym LLTJ (meaning Long Live Ty Jordan) in honor of late running back Ty Jordan. Jordan was the 2020 Pac-12 Freshman of the Year after piling up 597 rushing yards in five games.

Utah will stay in the poll after dominating the defending Big Sky champions.