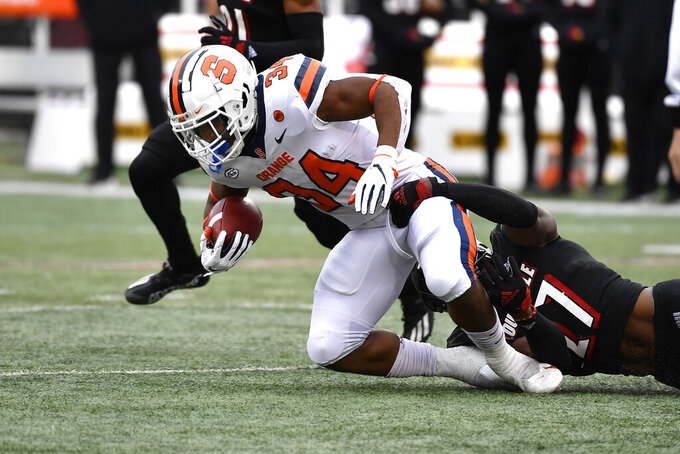 Syracuse running back Sean Tucker (34) is brought down by Louisville defensive back Kenderick Duncan (27) during the first half of an NCAA college football game in Louisville, Ky., Saturday, Nov. 13, 2021. Louisville won 41-3. (AP Photo/Timothy D. Easley)

N.C. State’s loss at No. 13 Wake Forest last weekend squandered the Wolfpack’s chance to control the ACC’s Atlantic Division race. Now Dave Doeren’s squad must win out and see Wake Forest lose out to claim the division winner’s spot in the league championship game. That stretch starts Saturday with Syracuse, which is trying to become bowl eligible.

The Wolfpack’s run defense against Syracuse RB Sean Tucker. N.C. State ranks 11th in the Bowl Subdivision ranks against the run by allowing 102.1 yards per game, including 3.22 yards per carry. That unit will be tested against Tucker, who is No. 2 nationally by averaging 136.2 yards per game.

Syracuse: Tucker. Louisville beat Syracuse 41-3 last Saturday and held Tucker to 95 yards rushing on 19 carries, snapping his streak of seven straight 100-yard games. The second-year back has run for 1,362 yards and scored 13 touchdowns, all but two of them on the ground.

N.C. State: QB Devin Leary. He is 14th in FBS by averaging 288.3 yards passing per game and tied for seventh with 29 touchdowns. He’s coming off a 408-yard effort at Wake Forest.

Tucker needs 11 yards to break the program’s single-season rushing record set by Joe Morris in 1979. … N.C. State has won eight straight games at Carter-Finley Stadium, including all five of its home games this year. Two more wins would give the Wolfpack the first unbeaten home record since 1974. … The Wolfpack can still finish with at least 10 wins for only the second time in program history. …Syracuse’s only win in Raleigh came in 2013 during the program’s first year in the ACC and the Wolfpack’s first season under Doeren. … N.C. State WR Emeka Emezie is coming off a 10-catch, 133-yard game with two touchdowns against Wake Forest. … The Wolfpack’s two league losses have been by a combined four points. … Syracuse is coming off a 41-3 loss at Louisville.