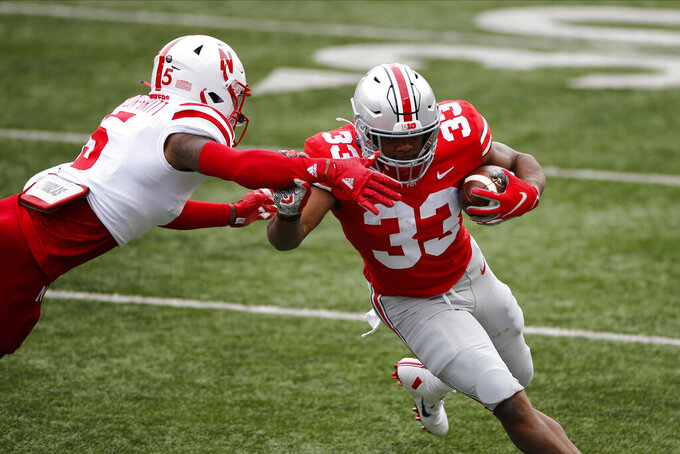 Ohio State can take a big step toward controlling the Big Ten’s East Division with a win. Penn State needs to get its offense on track and will look to bounce back from a controversial loss.

Penn State’s defensive line vs. Ohio State QB Justin Fields. Although Fields might prefer to sit in the pocket and pick defenses apart with his arm, he can also escape and extend plays with his feet. Rangy DEs Shaka Toney and Jayson Oweh will be tasked with keeping Fields contained.

Ohio State: RB Master Teague III. He was pretty efficient last week with 41 yards and two scores on just 12 carries. The 225-pounder could be a load for Penn State’s front seven to deal early in the game as starting linebacker Jesse Luketa will miss the first half due to a targeting penalty last week.

Penn State: QB Sean Clifford. The second-year quarterback was hard on himself after tossing two interceptions in the opener and will need to limit mistakes against a defense that allowed him to complete just 47% of his passes a year ago.

The last four games between these teams have been decided by a combined 16 points and five of the last nine were decided by a touchdown or less. … Ohio State has won 14 straight Big Ten games. … Penn State has won seven consecutive home openers. … Fields’ 20-for-21 passing accuracy last week was the best single-game effort for a Buckeye QB with at least 11 attempts in program history. … Clifford generated 357 yards of total offense last week. …This is the latest opening game at Beaver Stadium since an influence pandemic delayed the 1918 season until Nov. 2.