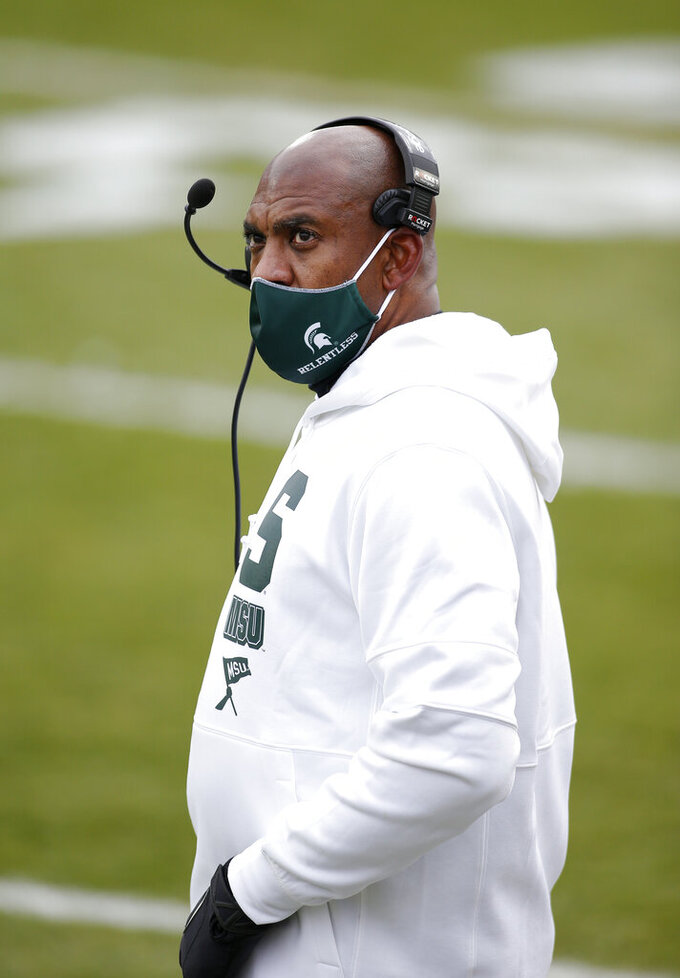 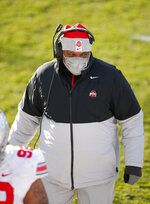 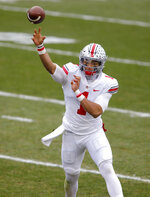 And with coach Ryan Day away from the team following his positive COVID-19 test, Fields did his best to fill that role, too.

“It was crazy. It kind of felt like I was almost our coach for the offense,” Fields said. “The guys with me, the leaders we have on offense, it made my job easier.”

Fields threw for two touchdowns and ran for two to lead No. 3 Ohio State to a 52-12 win over Michigan State on Saturday. Haskell Garrett scored on an interception for the Buckeyes, who were able to take the field after a coronavirus-related cancellation the previous weekend.

Ohio State (5-0, 5-0 Big Ten, No. 4 CFP) was without Day and a few other members of the coaching staff. The Buckeyes also had a list of 23 unavailable players. Defensive line coach Larry Johnson coached Ohio State in Day's absence.

“It was never about me. It was about the team," Johnson said. "It’s a great honor, but everything I do is for the players.”

Day was made available to reporters after the game.

“I took a lot of notes. I yelled a lot," he said. "I got really, really excited. On Haskell’s play, I was running around the house. It was not easy. It’s all about the team, but it was a difficult day.”

The Buckeyes led 28-0 at halftime. Now the big question is whether Ohio State's regular-season finale against Michigan next weekend will be played. The Wolverines did not play this weekend for virus-related reasons.

The concern for the Buckeyes is that they could fall short of the six-game threshold to be eligible for the Big Ten title game.

Michigan State (2-4, 2-4) was coming off a win over another undefeated team — Northwestern — but the Spartans were overmatched Saturday. Rocky Lombardi was shaken up and left the game after being sacked in the second quarter, and by that time, the rout was already on.

It was 21-0 when Michigan State was backed up near its own goal line. Lombardi's pass was tipped and intercepted in the end zone by Garrett.

“Outings like this are not acceptable, and I don't care who we're playing," Michigan State coach Mel Tucker said. "Even though that was a good team, when I turn on the film, I'm going to be sick to see some of the things that we did.”

Among the players who missed the game for Ohio State were offensive linemen Thayer Munford, Josh Myers and Nicholas Petit-Frere. Linebacker Tuf Borland was also out.

Fields scored on two short runs in the first half, sandwiched around a 28-yard touchdown pass to Garrett Wilson. Fields also hustled down the field to throw a late block on Trey Sermon's 64-yard touchdown run in the third quarter.

Payton Thorne completed his first 11 passes for Michigan State after relieving Lombardi, and he ran for a 20-yard touchdown in the third that made it 35-7.

“I think no matter what the score is, you've got to keep fighting,” Thorne said. “My dad actually has told me for the past years just to fight one more round — kind of a boxing analogy — and that really has stuck with me.”

Ohio State: The Buckeyes made this win look easy after what was probably a pretty stressful couple of weeks. Whether Ohio State plays for the Big Ten title or not, this performance should only help the Buckeyes impress the playoff committee.

Michigan State: The Spartans didn't take many of the risks you would expect from a big underdog. They punted on fourth-and-1 in the first quarter — and again on fourth down in Ohio State territory early in the third.

“If I thought we could get it, I would have gone for it,” Tucker said.

Garrett said his touchdown was emotional. The Ohio State defensive lineman has been able to play this season after being shot in the face while trying to break up an argument on a street near campus in August.

“He put his hand up and tipped the ball," Johnson said. "Pretty athletic, and what a great story. He’s lucky he’s still here. I’m very proud of where he’s at.”

There's no reason to expect Ohio State's status near the top to change after this routine victory. However, the Buckeyes were just 11 points ahead of Clemson for the No. 3 spot in the AP poll.

The Buckeyes are scheduled to play at Michigan, but at this point that game seems uncertain. Michigan State wraps up the regular season at Penn State.