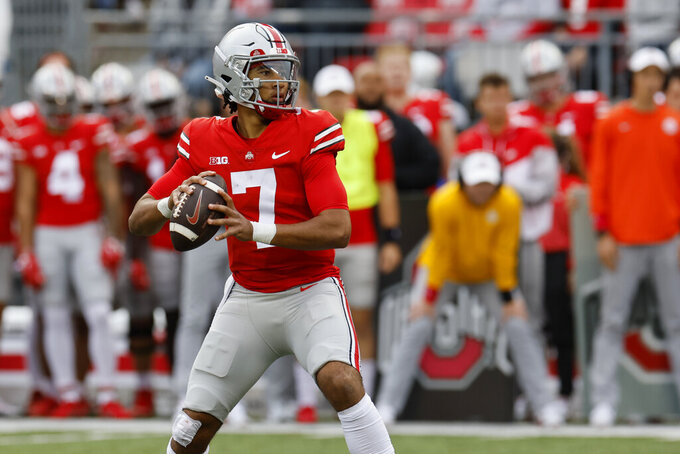 Ohio State quarterback C.J. Stroud drops back to pass against Rutgers during the second half of an NCAA college football game, Saturday, Oct. 1, 2022, in Columbus, Ohio. (AP Photo/Jay LaPrete)

Line: Ohio State by 26 1/2 according to FanDuel Sportsbook

Ohio State hopes to keep rolling offensively and defensively, and maintain an unblemished record heading into key games against Iowa and Penn State. The Buckeyes are facing their first road game of the season after starting out with five contests at home. Michigan State is looking for any positive sign after struggling in all phases of the game at Maryland. The Spartans rank no higher than ninth in the Big Ten in nearly every major offensive and defensive category.

Ohio State’s receivers vs. Michigan State’s secondary. The Spartans have had trouble all season covering receivers and now will face some of the best in college football. Michigan State has given up 979 yards passing over the last three games and Ohio State has the top-ranked passing offense in the Big Ten, averaging 303.4 yards per game.

Ohio State: QB C.J. Stroud carved up Michigan State’s defense in 2021 and has all the weapons to do it again. Last year, Stroud threw a school-record six touchdown passes in the first half as the Buckeyes built a 49-0 halftime lead.

Michigan State: QB Payton Thorne needs to play his best game of the season for the Spartans to have any chance of pulling off the major upset. After guiding Michigan State to an 11-2 record last year, Thorne has been inconsistent through the first five games this season completing 104 of 162 passes with eight touchdowns and six interceptions.

Ohio State RB TreVeyon Henderson, who was held out last week with an unspecified injury, is expected to return against Michigan State. … Michigan State defensive lineman/linebacker Jacoby Windmon leads the FBS in forced fumbles (5), is tied for sixth in sacks (5.5), and is tied for 11th in tackles for loss (8.0). … Ohio State is ranked in the top five in the AP poll for the fourth consecutive time going into the Michigan State game. … Ohio State is tied for best in the country with a 100% red-zone scoring rate (25 of 25). … The Buckeyes are third in the country offensively at 529.6 yards per game and No. 10 in total defense with 263.8 points per game allowed.