No. 4 Oklahoma takes QB controversy into matchup with TCU 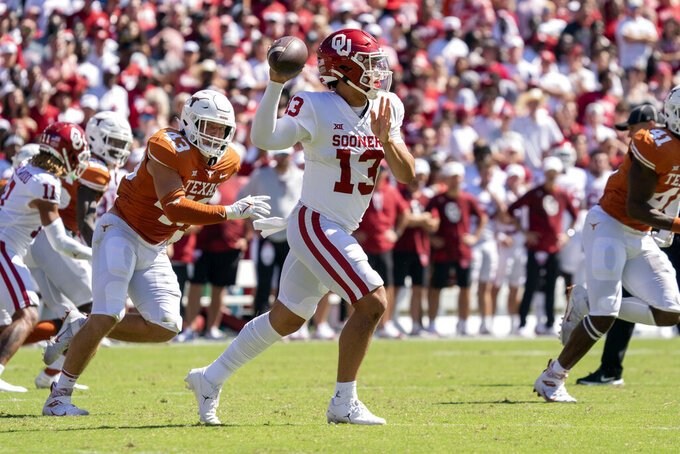 Oklahoma quarterback Caleb Williams (13) looks to pass during the first half of an NCAA college football game against Texas at the Cotton Bowl, Saturday, Oct. 9, 2021, in Dallas. (AP Photo/Jeffrey McWhorter)

Line: Oklahoma by 13 1/2, according to FanDuel Sportsbook.

Oklahoma has five wins by seven or fewer points, a school record for an entire season just six games in. It would help the Sooners to have a convincing victory. TCU would strengthen its hopes of reaching the Big 12 title game with a win.

Oklahoma's rushing offense vs. TCU's defensive front. Oklahoma likely will play true freshman quarterback Caleb Williams for a significant number of snaps after he rallied the Sooners to victory over Texas last week. If Oklahoma can get its ground game going, it will take pressure off him.

TCU: RB Kendre Miller. He rushed for 185 yards and three touchdowns last week against Texas Tech, and he could carry more of the load if Zach Evans is unable to play with a foot injury.

Oklahoma: QB Spencer Rattler. The preseason first-team All-American might be relegated to a backup role. He has completed 74% of his passes this season, and his stats likely wouldn't get him replaced in many programs. It will be worth watching how much he plays and how he handles his new situation.

Oklahoma is on a nation-leading 14-game win streak. ... It is the Sooners' second 6-0 start in the past 10 years. ... Oklahoma beat TCU 41-17 in the 2017 Big 12 title game. ... Oklahoma has won the past seven games against TCU. ... TCU ranks sixth nationally in kickoff returns with 32.1 yards per attempt. JD Spielman averages 33.6 yards per return. ... Punter Jordy Sandy, an Australian, is averaging 47 yards on 14 punts. The Horned Frogs rank 21st nationally in net punting. ... Oklahoma’s defense has held five of six opponents this season to 100 or fewer rushing yards (87.5-yard average).