No. 6 Ohio St confident about another run at national title 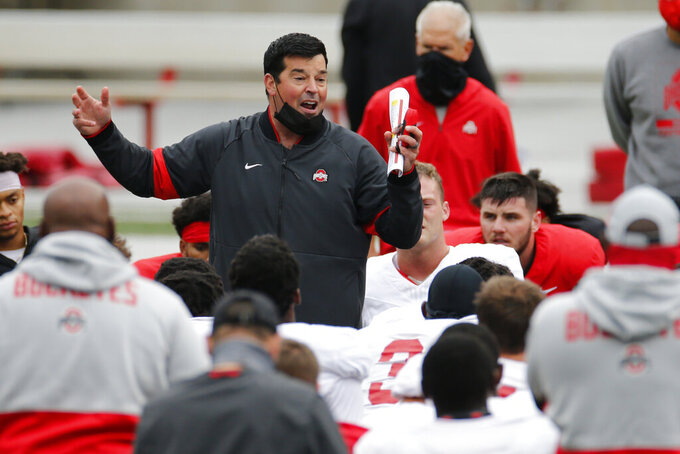 COLUMBUS, Ohio (AP) — Ohio State came within one botched play of likely advancing to the national championship game last season. Getting that close -- and the fervent belief they have the weapons to get there in 2020 -- motivated the Buckeyes through the long, unpredictable offseason.

Coach Ryan Day was convinced this year’s team could win the national title, especially with Heisman Trophy finalist Justin Fields returning at quarterback. The second-year coach was so distraught during the month or so that the Big Ten put the season on the shelf that he barely slept.

No. 6 Ohio State is loaded again for sure. Besides Fields, the Buckeyes return an offensive line stocked with NFL prospects, last year's top receiver, Chris Olave, and a veteran defense that includes All-American cornerback Shaun Wade.

“We have all the weapons we need to be putting up crazy numbers and winning games by as much as we want to,” said Jake Hausmann, one of three returning tight ends who combined for seven touchdown catches last season.

Ohio State surely will miss 2,000-yard rusher J.K. Dobbins and defensive end Chase Young -- also a Heisman finalist -- but as usual there are some guys waiting who might turn out to be just as good.

After the Big Ten postponed the season Aug. 11. Wade, the star cornerback, and offensive lineman Wyatt Davis opted out to prepare for the NFL draft. Both decided to come back to the team within days of the conference reinstating the season on Sept. 16. Both said they saw the potential for a national championship and didn’t want to pass it up.

“I think they're going to be better than they were last year,” ESPN college football analyst Kirk Herbstreit said. “I think they're a forgotten brand now for obvious reasons. I think when they hit the ground running, people will be reminded how good they are.”

Expectations are lofty for Fields after a stellar 2019 season and his trip to New York for the Heisman ceremony.

After transferring from Georgia after the 2018 season, he completed 67% of his passes for 3,273 yards, 41 touchdowns and just three interceptions last year for the Buckeyes. His cool demeanor and ability to extend plays are well known, but his teammates say he is even more confident and vocal now in his role as a leader.

Fields, who likely would have been a first-rounder in the spring even if he had not played this season, is another with his eye on the great potential of the 2020 team.

“I don’t think there are words to describe how determined I am,” he said.

Runners like Dobbins don’t come along all the time. He rushed for 4,459 yards in three years, second most all-time in school history behind two-time Heisman winner Archie Griffin.

His numbers could have been higher last year, but he often sat in the second half after the Buckeyes had piled on the points. That enabled backup Master Teague III to get big chunks of playing time and log 789 rushing yards.

Teague, who had to rehab from an Achilles tendon injury suffered on the first day of spring practice in March, now is healthy and will be the presumptive starter. He could split carries with Trey Sermon, an Oklahoma transfer, with others contributing.

Ohio State does not release numbers or information on players or staff who test positive for the coronavirus, so it’s hard to tell what the situation is inside the program. The program is testing 120 players and 50 staff members daily. The athletic department reported it is spending $3.5 million on testing.

Ohio State's first three nonconference games were lost when the Big Ten limited the schedule to conference games only. After the opener against Nebraska, the Buckeyes will get a likely Top 10 matchup with No. 9 Penn State on Halloween. The rest might be a romp until they get to No. 19 Michigan on Dec. 12 in Columbus. It’ll be the first time since 2010 the Ohio State-Michigan game will not be played on the Saturday after Thanksgiving, and the first time in the 127-year history of the rivalry that it's ever been played in December.