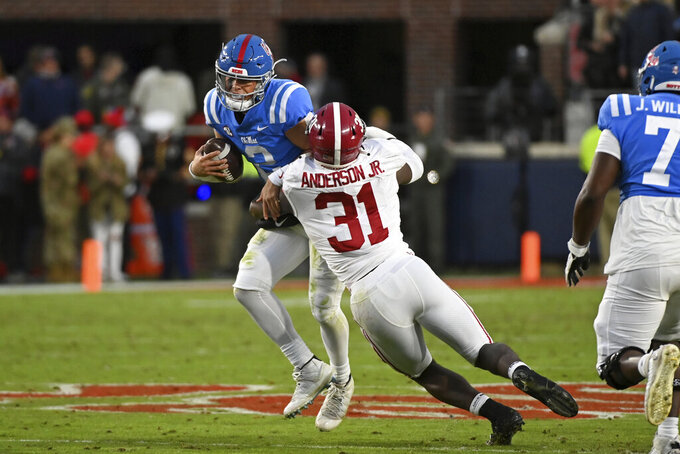 Alabama can lock up another 10-win season. Auburn is targeting bowl eligibility and a happy ending to a trying season.

But this Iron Bowl, more than most in recent memory, is primarily about the year's worth of braggin' rights that comes with a win. Typically, that's enough.

The eighth-ranked Crimson Tide (9-2, 5-2 Southeastern Conference, No. 7 CFP) isn't playing to remain in league title or playoff contentio n but could still perhaps enhance its bowl destination. That reality denies Auburn (5-6, 2-5) even the joys of playing the spoiler role but a bowl shot is still on the line.

It's still big, still as Alabama coach Nick Saban said, “one of the greatest rivalry games in college football.” Important to fans and to players' legacies and offseason moods. It's just for statewide supremacy not national title hopes like it has been for both programs multiple times since Saban's arrival.

“It means a lot to us, our players and our fans, and we’re going to do the best job we can to get ready for this game,” said Saban, whose teams have all reached 10 wins every season following his 2007 debut.

Auburn has staged a minor turnaround with back-to-back wins over Texas A&M and Western Kentucky under interim coach Carnell Williams. It would become a major one with an upset of the Tide, which is a three-touchdown favorite.

Williams, the hero of the 2003 Iron Bowl for Auburn, doesn't think he needs a “magical speech” to get his team up for this one. But he has had the Tigers playing better lately.

“I truly feel like a lot of stuff that’s understood really doesn’t need to be said,” said Williams, a former Auburn and NFL running back who took over following Bryan Harsin's firing on Oct. 31. “I’m looking for our guys to come out and fight and compete and we’re not backing down at all.”

This figures to be the last game at Bryant-Denny Stadium for the Tide’s biggest stars and top NFL prospects, quarterback Bryce Young and linebacker Will Anderson Jr.

Or even their last games at Alabama if either or both opt out of a bowl game in their first time missing the playoffs. Both just say they’re focused on this game, not the future.

“I haven’t thought about anything in the future,” Young said. “All I care about now is this program.”

Auburn’s Tank Bigsby and Jarquez Hunter have both topped 100 rushing yards in each of the past two games. Quarterback Robby Ashford is actually the Tigers’ No. 2 runner.

Alabama counters with tailback Jahmyr Gibbs (presuming his ankle is healed up) and Jase McClellan, who ran for 156 yards and two touchdowns in his absence against Austin Peay.

Alabama and Auburn have both been sorely lacking in the go-to receiver department. Running backs lead both in receptions.

Ja’Corey Brooks, a hero of last year’s Iron Bowl, is leading Alabama with 547 yards followed closely by Jermaine Burton (503). That means the Tide’s four-year string with a 1,000-yard receiver is coming to an end.

Auburn got to play the spoiler in 2019, eking out a 48-45 win over the fifth-ranked Tide. LSU had already clinched a spot in the SEC title game en route to a national title, but this loss officially knocked Alabama from playoff contention.

The Tigers almost did it again last season, falling 24-22 in a four-overtime game. Alabama survived and won the SEC title before falling in a national championship rematch with Georgia.