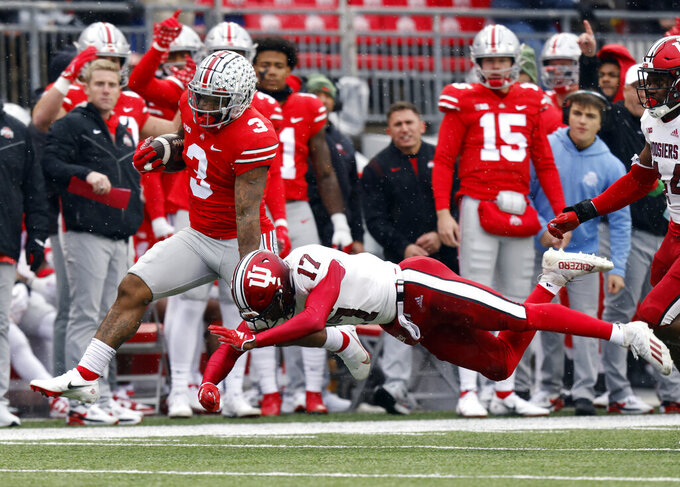 Ohio State running back Miyan Williams, left, tries to get past Indiana defensive back Jonathan Haynes during the first half of an NCAA college football game Saturday, Nov. 12, 2022 in Columbus, Ohio. (AP Photo/Paul Vernon)

COLUMBUS, Ohio (AP) — Ohio State running back Miyan Williams injured his right leg and had to be carted the locker room in the first half of Saturday's game against Indiana.

Williams already had rushed for 147 yards and a touchdown when he went down awkwardly on his ankle after a 4-yard gain with 2:17 left in the first half and the No. 2 Buckeyes leading Indiana 28-7.

Williams has carried the load the last two games with TreVeyon Henderson sidelined with an injury. Ohio State hasn't disclosed details of Henderson's injury, but it could be problematic if both experienced backs are on the shelf for the matchup with No. 3 Michigan in two weeks.

Williams broke away for a 48-yard touchdown run earlier in the second quarter, recording his fourth 100-yard game of the season.

True freshman Dallen Hayden, who also had a first-half touchdown run, is the primary backup to Williams.