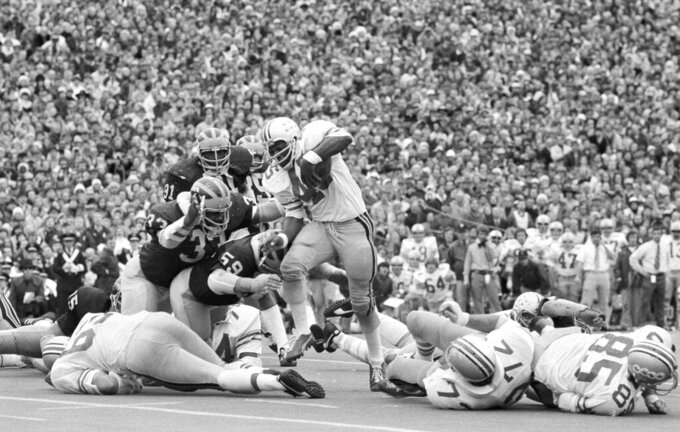 FILE - Ohio State's Archie Griffin picks up some of his game-high 163 yards against Michigan during an NCAA college football game in Ann Arbor, Mich., as Michigan's Walt Williamson (91), Carl Russ (33) and Steve Strinko (59) defend. The game between the undefeated teams ended in a 10-10 ties. (AP Photo, File) 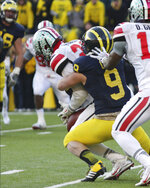 ANN ARBOR, Mich. (AP) — The highly anticipated matchup between No. 2 Ohio State and No. 3 Michigan with much at stake is almost here.

The Buckeyes and Wolverines will play for the Big Ten East title and a spot in the conference championship game, where one of them will be big favorites and a win away from reaching the College Football Playoff.

If The Game goes as expected on Saturday in the Horseshoe, it will join a long list of memorable moments in a series that dates to 1897.

Here’s a look back in chronological order at some of the top games in one of the greatest rivalries in sports over the last 50-plus years, according to AP Sports Writer Larry Lage.

In Bo Schembechler’s first game coaching against Woody Hayes, No. 12 Michigan beat the top-ranked Buckeyes 24-12 at home. Hayes lamented the loss, saying the Schembechler-led Wolverines beat the best team he ever had. The game was the start of what became known as the “Ten Year War,” with Bo beating his mentor five times, losing four games and finishing one matchup famously tied.

No. 1 Ohio State and No. 4 Michigan, both undefeated, battled in an instant classic to a 10-10 tie with enough drama to be the subject of a documentary, “Tiebreaker.” The Wolverines seemed to be the better team that afternoon, but kicker Mike Lantry missed two field goals in the last two minutes. Big Ten athletic directors chose the Buckeyes, not Michigan — perhaps because quarterback Dennis Franklin was injured — to represent the Big Ten in the Rose Bowl at a time when the conference would only allow one team to be in a bowl. The Big Ten would later decide to allow more than one school to participate in the postseason.

Ohio State fired coach Earle Bruce just days before The Game after a three-game losing streak dropped his team to 5-4-1. The unranked Buckeyes, wearing white headbands with Bruce’s name written on them, beat the unranked Wolverines 23-20 to drop them to 7-4. Bruce was 81-26-1 overall, including 5-4 against Michigan, but Ohio State let him go and brought John Cooper to campus in a move many Buckeyes would rue because he went 2-10-1 in The Game.

The Game wasn’t close that year as No. 4 Michigan routed No. 18 Ohio State 31-3, but it produced a favorite memory for fans north of the state line and a nightmare for those to the south. Desmond Howard, who hailed from Ohio, returned a punt 93 yards for a touchdown and famously struck a pose from the Heisman Trophy statue he later won.

Like Howard, Charles Woodson crossed the border from Ohio to play for the Wolverines and ended up winning a Heisman Trophy in part because of a signature moment in The Game. Woodson returned a punt 78 yards for a score, sprinting up the same sideline — Ohio State’s — and into the same end zone that Howard did to help No. 1 Michigan beat No. 4 Ohio State 20-14 en route to a national championship.

Maurice Clarett, playing in The Game for the only time, helped No. 2 Ohio State get past the 12th-ranked Wolverines 14-9 on the way to a national title. On the final play, Will Allen sealed the victory for the Buckeyes by intercepting John Navarre’s pass just in front of the goal line. It was one of many victories in the rivalry for Ohio State coach Jim Tressel, who was 9-1 against the Wolverines before resigning in 2011 amid NCAA violations from a tattoo-parlor scandal.

A day after Schembechler died, The Game featured the top-ranked teams in the country. No. 1 Ohio State beat No. 2 Michigan 42-39, building a 28-14 halftime lead and holding off the Wolverines after they pulled within four points twice in the second half. Ohio State pushed its lead back to 11 with 5:38 remaining in an entertaining contest that wasn’t quite as close as the final score.

No. 3 Ohio State held off the unranked Wolverines 42-41 when Tyvis Powell intercepted Devin Gardner’s 2-point conversion pass with 32 seconds left after Michigan coach Brady Hoke, an Ohioan, chose to go for the win instead of taking his chances in overtime. Hoke disliked Ohio State so much he wouldn’t say “State” when mentioning the school and couldn’t recall wearing red.

With the ball on the Michigan 16, then-Ohio State coach Urban Meyer decided not to attempt a tying field goal with a kicker who had already missed two short ones in regulation. J.T. Barrett kept the pigskin and ran into the back of his blocker, A.J. Alexander, but the disputed spot stood after a video review. Ohio State soon scored the winning touchdown.

“That was not a first down,” Harbaugh said after the game. “I’m bitterly disappointed with the officiating today.”