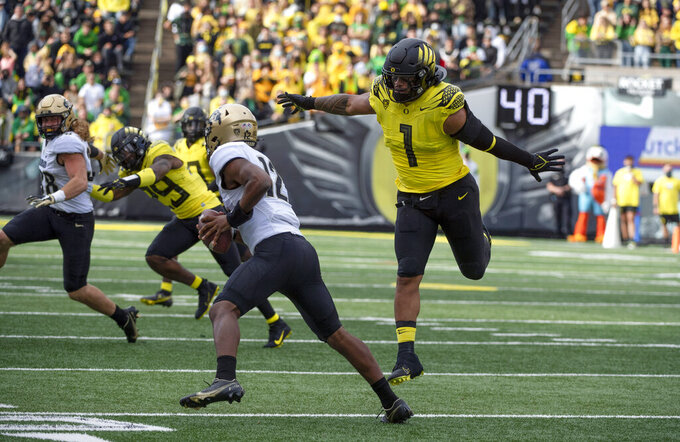 The path is way more uphill for Colorado: Four straight wins are now necessary to be in the picture, starting Saturday at Folsom Field against the Beavers.

“We need to step up to the plate and do a great job in giving ourselves a chance to be successful,” said Colorado coach Karl Dorrell, whose team is attempting to reach back-to-back bowl games for the first time since 2004-05. “The guys understand what’s in front of them and we’re ready to move forward.”

Oregon State (5-3, 3-2 Pac-12) had a chance to reach win No. 6 last weekend but lost 35-29 at California as its usually dominant ground game suddenly sputtered. The Beavers haven't been to a bowl since 2013.

“We’ve got some guys that were frustrated, which I think is a healthy thing,” Oregon State coach Jonathan Smith said. “You’re trying to win games, and you come away with a loss — it shouldn’t feel good."

The Beavers are returning to the field of one of their biggest comebacks — and where Smith picked up his first Pac-12 win. In 2018, Oregon State trailed 31-3 before rallying for a 41-34 overtime win.

Dorrell and the Buffaloes (2-6, 1-4) have some work ahead of them to climb into the bowl picture. They need to beat the Beavers and then UCLA on the road. Then knock off Washington and finally win at Utah. It’s a tall task, but Dorrell won his first four games to start his tenure at Colorado in a coronavirus-shortened season last year.

“November is that month you want to start playing your best football,” Dorrell said.

It will be a big weekend in Boulder, with homecoming and recognition of the nine athletes going into the school’s Hall of Fame.

Among the honorees will be running back Chris Brown, who finished eighth in the 2002 Heisman Trophy voting. This year's class will bring the total to 131 members, plus the 1959 ski team.

Former Colorado quarterback turned Oregon State backup QB Sam Noyer returns to Folsom Field. Noyer guided Colorado to a 4-2 mark and a bowl appearance last season before transferring to Oregon State in the offseason. Noyer started as the Beavers QB before being supplanted by Chance Nolan.

“I’m looking forward to seeing Sam, just to get a chance to shake his hand, give him a hug and see how he’s doing,” Dorrell said. “I think a lot of our players would probably have the same type of feeling and reaction when they see him."

Oregon State stumbled in its running game against the Bears, with B.J. Baylor — the league's leading rusher — held to 42 yards. The Beavers’ streak of six games with at least 200 yards rushing was halted.

Part of the reason may be this: Left guard Jake Levengood was out and right tackle Brandon Kipper banged up. Smith said earlier in the week that it was too early to tell whether they’d be back in time.

Stopping Baylor and the Beavers may be even more of a handful for the Buffs with injured linebacker Nate Landman doubtful for the game. Landman's trying to become the first player in school history to lead the team in tackles for four seasons.

"They know that one guy doesn’t make a defense,” Dorrell said. “He expresses that with those guys, too.”

Colorado quarterback Brendon Lewis has thrown five of his seven TD passes to freshmen receivers, including a pair to Brenden Rice.

Someone has to interrupt their streak.

Dorrell is 3-0 against Oregon State, all of which occurred while he was at UCLA. Smith is 1-0 against Colorado, and an additional 3-0 when he was offensive coordinator at Washington.