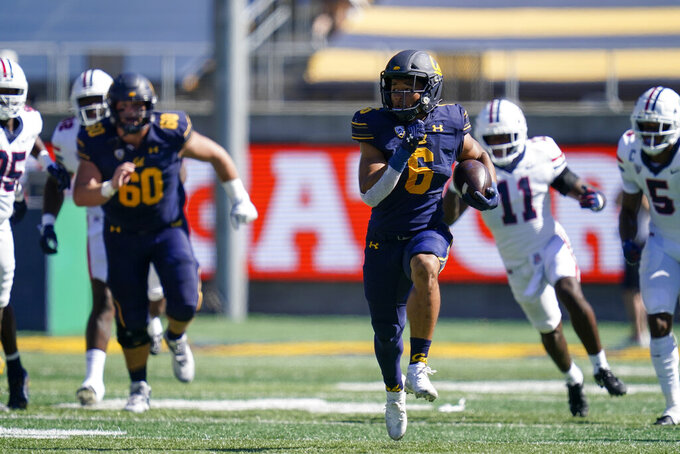 BERKELEY, Calif. (AP) — Jaydn Ott ran for 274 yards and three touchdowns and California opened Pac-12 play with a 49-31 victory over Arizona on Saturday.

Ott scored on a 73-yard run on the second play from scrimmage, an improbable 18-yarder in the third quarter after he had appeared to be stopped for a short gain, and then another 72-yarder to ice it late in the fourth.

“Every time I touch the ball, I feel like I'm going to score,” Ott said. “That's my mentality.”

Ott had the third most rushing yards in school history, trailing only Jahvid Best's 311 against Washington in 2008 and Jerry Drew's 283 against Oregon State in 1954.

“That's explosive," coach Justin Wilcox said. “We’ve been talking about it for a long time. You’ve seen it in flashes. We saw it a bunch today. He's a dynamic guy and has the ability to take it to the house from a lot of spots.”

Jack Plummer added three TD passes for the Golden Bears (3-1, 1-0), who won their sixth straight home game. It's their longest winning streak at Memorial Stadium since a nine-gamer in 2008-09.

Jayden de Laura threw for 401 yards and two touchdowns for the Wildcats (2-2, 0-1), who had no answers defensively and lost their 12th straight conference road game.

But de Laura also turned the ball over three times.

“We couldn’t stop the run and when you can’t stop the run, you run into the issues of you have to try to press,” coach Jedd Fisch said. "I think we started to press there at the end and started turning the ball over in the fourth quarter. That’s what cost us.”

A year after Arizona beat COVID-depleted Cal 10-3 at home for its only win in 2021, the teams exceeded that point total after both teams scored touchdowns on the opening drive.

It was a back-and-forth, high-scoring affair in the first half with Ott scoring on a 73-yard run on the second play from scrimmage to set the tone.

The Wildcats scored on four of their first five drives of the game, getting two short TD runs by Jonah Coleman and Michael Wiley and a 24-yard TD pass from de Laura to Tetairoa McMillan.

Plummer threw a 16-yard TD pass to J. Michael Sturdivant in the second quarter and gave Cal the lead early in the third when he found Keleki Latu from 3 yards out on fourth-and-1.

Ott added his second TD midway through the third quarter. He ran into a group of defenders at the 13 yet managed to keep his feet and snuck out of the scrum to run it into the end zone to make it 35-24.

Arizona: The Wildcats were gashed defensively all game as they struggled to tackle Ott or cover receivers downfield. Despite some promising signs on offense, that led to Arizona's 21st loss in its last 24 Pac-12 games.

California: The Bears have been a defensive team ever since coach Justin Wilcox arrived in 2017, but it was the offense that led the way in this game. The 213 yards allowed by Cal in the first quarter were the most ever under Wilcox. But the defense stepped up in the second half, forcing back-to-back punts and then recovering a fumble by de Laura to help Cal take control.

“In the first half, we didn’t tackle well, we didn't rush, we didn't cover anybody. It was bad," Wilcox said. “Got some big stops in the third.”