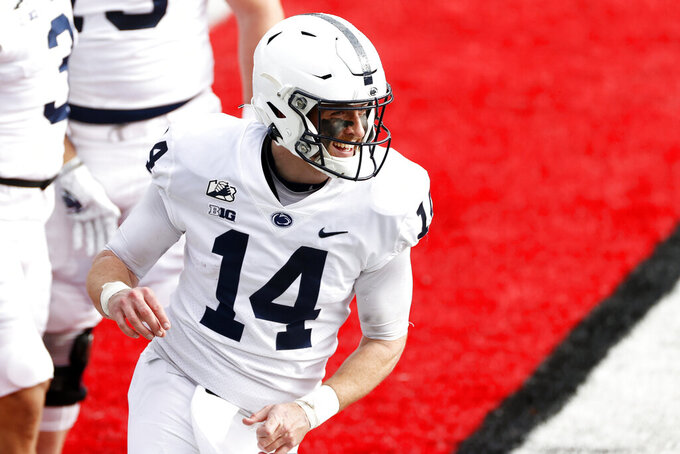 STATE COLLEGE, Pa. (AP) — Sean Clifford is grateful that the faces he’s been able to see and interact with in person have stayed close this season.

Penn State’s quarterback realizes many of them, like himself, weren't used to losing and could’ve jumped ship, as others across the country have done by opting out due to COVID-19.

Instead, they’ve stayed on to right it. It’s why Clifford feels good about where the Nittany Lions (2-5) are headed as they end the regular season against Michigan State (2-5) on Saturday.

“A lot of teams might’ve just said, ‘You know what, it’s whatever. We’re going to move on to next year,’” Clifford said. “But this team has come in and worked every single day. It doesn’t matter what’s going on, what anybody is saying. We’re just trying to take care of our business and I think it’s going to pay off in the end.”

Over their last two games, the Nittany Lions have developed a gritty running game and taken better care of the football on offense in back-to-back wins.

“Those guys fly around and they’ve got a good pressure package,” Michigan State coach Mel Tucker said. “They seem to be able to play to the strength of their players, and they’re able to mix some coverages and things like that and they seem to be growing and getting better.”

Penn State’s players insist it’s because they’ve stuck together. Star linebacker Micah Parsons opted out before the season, but no other Nittany Lion has joined the more than 140 players across college football who’ve done so.

As a result, they believe they’ve done more than just salvage wins in the final weeks of a truncated season.

“This program has been through so much,” offensive lineman Will Fries said. “(I) think that our class has realized that it’s not just about us. It’s about the guys before us, the guys that are coming after us, so it’s on us to stick together, get the ship going in the right direction and continue to fight for this program.”

The Spartanswere knocked around by No. 3 Ohio State last week, and Tucker demanded his team get to work immediately watching film of the loss. Tucker was still notably irked by his team’s performance in the 52-12 loss when he met with reporters on Wednesday, calling the effort “totally unacceptable.”

It inspired some of the Spartans this week.

“Everybody definitely felt like they seemed to have a little fire ignited inside of them after this past game,” defensive end Drew Beesley said. “I was very upset with the results because I know that we’re capable of playing better and mistake-free."

Tucker said Rocky Lombardi “seemed to be doing better” after the starting quarterback was forced from last week's game with an apparent head injury. If he can’t go, freshman Payton Thorne could get his first career start. Although Lombardi’s started all six games, Thorne has seen the field when his teammate has struggled.

Thorne replaced an ineffective Lombardi against Iowa and Indiana earlier this season. His biggest workload came against the Buckeyes where he completed 16 of 25 passes for 147 yards with an interception.

“The quarterback has to be the number one competitor on your team, period,” Tucker said.

Clifford, who briefly yielded Penn State’s starting job to Will Levis, has been encouraged by Levis’ playing time. Even though Clifford has reclaimed most of the reps, he’d still like to see his buddy get in the game and provide another rushing dimension.

“When Will was in, we ran the ball super well,” Clifford said. “He was super-efficient. Our offense moved and I thought that we did good things as an offense as a whole.”

Levis has 56 carries for 185 yards and a touchdown in the last three games.

Both teams have struggled with ball security all season and are tied for last in the Big Ten in turnover margin with minus-9.

The Spartans’ have turned the ball over 19 times in six games while the Nittany Lions have coughed it up 15 times in seven. Penn State has taken better care of the ball lately, with just two turnovers in its last two games, however.

Michigan State has gone the other way. The Spartans have lost two fumbles and tossed three interceptions in their last two.