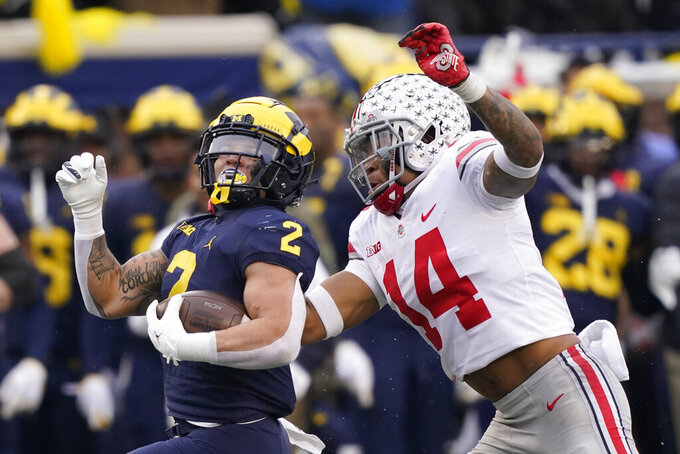 FILE - Michigan running back Blake Corum (2) is chased by Ohio State safety Ronnie Hickman during the second half of an NCAA college football game Nov. 27, 2021, in Ann Arbor, Mich. The Ohio State defense that was shredded by backs Hassan Haskins and Corum for 256 yards last year is vastly improved under new coordinator Jim Knowles. But Corum is better than ever in 2022. (AP Photo/Carlos Osorio, File)

COLUMBUS, Ohio (AP) — Ohio State has been counting the days until it could get a shot at revenge.

Not like the Buckeyes are ever able to forget. An electronic display in the football practice facility counts down the days, hours and minutes left before kickoff of the next game against Michigan.

But the feelings are rawer this time, the No. 2 Buckeyes edgier in the buildup to Saturday's game because of how things went down last year in Ann Arbor.

“Every single day we think about it,” defensive end Zach Harrison said of that humiliating 42-27 loss to Michigan, an opponent that generations of Ohio State players and fans have been trained to hate with a passion.

“It’s the one game that we’ve had in the back of our minds all year, and now it’s time,” safety Lathan Ransom said. “I’m pretty sure you can imagine how we’re feeling without me saying too much.”

That loss a year ago snapped Ohio State's eight-game winning streak in the series as well as its run of 26 straight wins over Big Ten opponents. It denied the Buckeyes a Big Ten championship for the first time in five seasons and ended its chances to get into the College Football Playoff.

“Of course, we’ve been licking our wounds for 365 days, hearing all the laughing and everything that everybody’s been saying,” said C.J. Stroud, Ohio State's quarterback and a Heisman Trophy contender. “So man, we’re very excited.”

The chance for payback comes Saturday at Ohio Stadium.

“Any time you have an angry football team, you've got a chance," said ESPN college football analyst Kirk Herbstreit, a former Ohio State QB, who said he saw the Michigan team turn its anger into energy and momentum that was absorbed by the crowd at the Big House last year.

Understand that most Ohio State fans, given the choice, would rather beat Michigan than win a national championship, an ethos ingrained by coach Woody Hayes during his romanticized “Ten Year War” with Bo Schembechler and the Wolverines in the late 1960s and ’70s.

But even players who didn't grow up with the rivalry — a majority on both rosters are from somewhere other than Ohio or Michigan — can appreciate everything that's at stake.

Both teams come in unbeaten for the first time since 2006. Ohio State is No. 2 and Michigan is No. 3 in the AP Top 25 and the CFP rankings. The winner will be favored in the Big Ten championship game, with a wide path to the CFP.

Ohio State coach Ryan Day, whose only conference loss in his first three seasons was dealt by Jim Harbaugh and the Wolverines last year, said the team talks and thinks about The Game constantly. Players have been saying since training camp that avenging last year's loss is at top of their list of goals.

Michigan players say they're looking forward to taking two straight from the Buckeyes — and winning at the Horseshoe — for the first time in more than two decades.

“Nobody wants to lose this game,” Wolverines tackle Ryan Hayes said. “We’re going to have all the motivation that we need.”