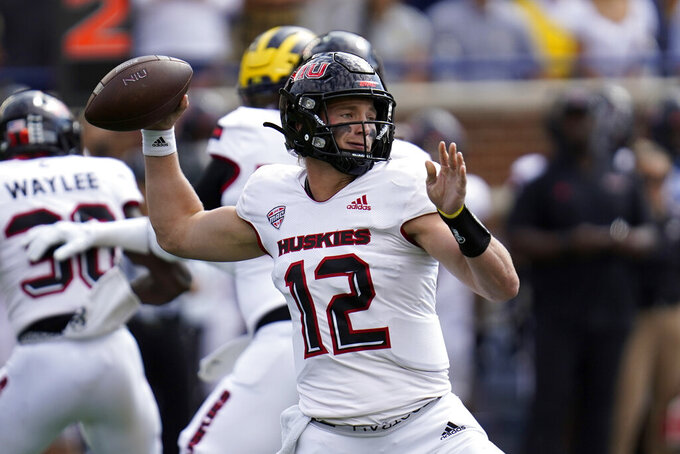 FILE - Northern Illinois quarterback Rocky Lombardi (12) throws against Michigan in the first half of a NCAA college football game in Ann Arbor, Mich., Sept. 18, 2021. Lombardi was looking for a new place to football after deciding to transfer from Michigan State nearly a year ago. Northern Illinois was searching for a quarterback to spark a turnaround. Lombardi and the Huskies proved to be a great match in the Mid-American Conference. (AP Photo/Paul Sancya, File)

Rocky Lombardi was looking for a new place to play football after deciding to transfer from Michigan State nearly a year ago.

Northern Illinois, meanwhile, was searching for a quarterback to spark a turnaround.

Lombardi and the Huskies proved to be a great match in the Mid-American Conference.

Northern Illinois (8-4, 6-2 MAC) earned a spot in the MAC championship game against Kent State (7-5,6-2) on Saturday at Ford Field in Detroit.

“We wouldn’t be here without Rocky Lombardi as our quarterback," coach Thomas Hammock said.

Lombardi was a nine-game starter for the Spartans and helped them beat No. 11 Michigan and No. 13 Northwestern last year. By the end of last season, he lost his job to Payton Thorne, who helped them win 10 games this year.

In the pandemic-shortened season, the Huskies were winless.

“Them going 0-6 almost attracted me to the program a little bit more," Lombardi said. “I liked what coach Hammock had to say and I had faith in him.”

Lombardi landed in DeKalb, Illinois, after being recruited by the program out of high school by former coach Rod Carey, who is now leading Temple. Lombardi connected with the program again last winter thanks to offensive coordinator Eric Eidsness, who knows his dad, Tony, a longtime football coach.

“I explained to him, I know this is going to sound crazy, but we are a tremendous leader at quarterback away from being a championship-type team," Hammock recalled. “'And, if you’re the type of guy that you seem to be, we can have an opportunity next season to win a championship.

“That sounds like a lot coming from a guy who was 0-6 at the time, but I knew the type of team we were building. We took a bunch of lumps with young guys and Rocky came in and was exactly what we needed."

Hammock, the MAC Coach of the Year, in his third season became the fifth coach to help the Huskies become bowl-eligible since 2004.

In Sean Lewis' fourth season with the Golden Flashes, he led them to their first division title since 2012. He is within a win of Ken State's first MAC championship since 1972 and just the second in school history.

Lewis credited a small group of players for sticking around to enjoy success at the school.

“There’s 14 of them that were in our very first team meeting that are still on our roster and they’re really the heart and soul of our team,” he said. “They didn’t have to stay, especially in this day and age where there’s a coaching change and guys decide to go other places. They bought in on what our plan was to win.”

Ken State scored 31 points in the second quarter to beat Northern Illinois 52-47 a month ago, ending a 10-game losing streak in the series with its first win over the Huskies since 2001.

Dustin Crum threw two touchdowns passes and ran for two scores for the Golden Flashes. Lombardi had a school-record 532 yards passing and receiver Trayvon Rudolph set a program mark with 309 yards receiving in the shootout, which ended their team’s five-game winning streak this season.

Crum became Kent State's first MAC Player of the Year since Eric Wilkerson in 1987. The fifth-year senior has thrown 15 touchdowns with just four interceptions and has run for 11 scores this season.

Northern Illinois running back Jay Ducker was named MAC Freshman of the Year after closing the regular season with an average of 134 yards rushing over the last six games.

Kent State parted ways with defensive coordinator Tom Kaufman after losing to Central Michigan 54-30 on Nov. 10 — a week after beating Northern Illinois in a shootout — and promoted first-year cornerbacks coach C.J. Cox to run the unit.

Northern Illinois might as well have a home locker room at Ford Field, where it will play for a 10th time. The Huskies are 4-4 in MAC championship games in the home of the Detroit Lions, where they lost to Duke in the 2017 Quick Lane Bowl.

When Lewis started his playing career at Wisconsin in 2004, Hammock was a graduate assistant for Barry Alvarez.