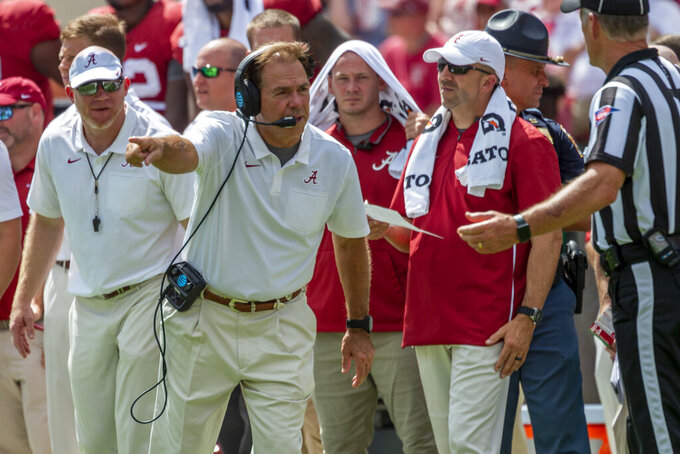 Alabama head coach Nick Saban argues for a call against Southern Miss during the second half of an NCAA college football game, Saturday, Sept. 21, 2019, in Tuscaloosa, Ala. (AP Photo/Vasha Hunt)

TUSCALOOSA, Ala. (AP) — Alabama freshman kicker Will Reichard is questionable for the Mississippi game, though coach Nick Saban is more optimistic about two defensive starters.

Linebacker Terrell Lewis and nose guard DJ Dale could return to practice Tuesday or Wednesday, Saban said on Monday. The coach said he's "hopeful that they'll be ready to play in this game."

Lewis missed the Southern Miss game with a hyperextended knee. Dale sustained a patella tendon strain late in the first half and didn't return.

The prognosis was a welcome change this season going into Saturday's game with the Rebels.

Reichard left the Southern Miss game with a pulled hip flexor after a kickoff in the first quarter. Former starter Joseph Bulovas replaced him the rest of the way and made all five extra point attempts.

Saban said Reichard "may be a little more day to day and a little more questionable than the other guys." The freshman beat out Bulovas, who made 14 of 18 field goals and 75 of 81 PATs last season.

"He certainly demonstrated he had confidence in that game," Saban said. "We have confidence in him. He kicked for us all of last year. So we're going to encourage him and be positive with him.

"But ultimately every player has got to believe in themselves that they're going to be successful in what they do."