Saban: Alabama RB McClellan out for year with knee injury 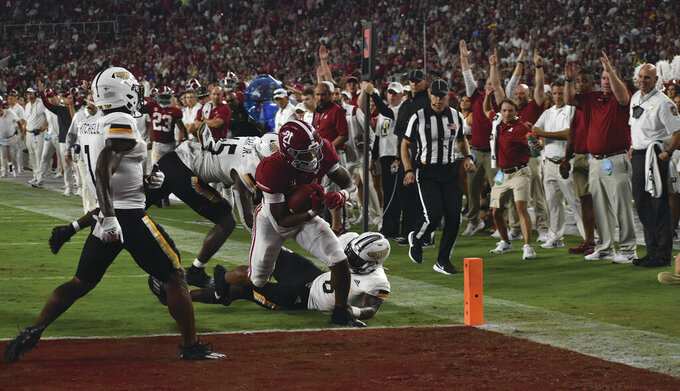 Alabama coach Nick Saban says tailback Jase McClellan is out for the year with a knee injury, leaving the team with three healthy scholarship backs.

The top-ranked Crimson Tide's second-leading rusher is set for surgery on Tuesday, Saban said Monday. McClellan was injured in a win over No. 17 Mississippi, when Brian Robinson Jr. ran 36 times for 171 yards and four touchdowns.

McClellan is second on the team in rushing with 40 carries for 191 yards and a touchdown. He also has 10 catches for 97 yards with another three scores and scored on a blocked punt return against Mercer.

“Jase is a very good player,” Saban said. "Did a great job as a runner, as well as a blocker as well as very good special teams player. We have to replace him in a lot of areas on our team, but we do have confidence in Roydell (Williams), and I think he’ll do a good job.

“Trey Sanders is going to get more opportunity now and he’s got to be able to step up and continue to make progress as well.”

McClellan made his first career start against Southern Miss when Robinson was nursing a rib injury. McClellan had 97 yards on 12 carries and also caught a 9-yard touchdown pass.

“Jase has been contributing great to our offense,” Robinson said after Saturday's win over the Rebels. "He’s been doing a great job just playing a key role, just playing his role to the best of his ability.

“It’s our job to stay beside him and just keep him up and keep him motivated so he can make a great return when he does come back.”

That leaves more carries for Williams, who has averaged 6.4 yards on 24 runs, and Sanders. Sanders is a former five-star recruit who has run for 83 yards.

Saban said freshman Camar Wheaton, another five-star signee, hasn't been cleared to practice because of a knee injury. Saban said the coaches will look at other players with running back experience as potential emergency fill-ins.

“I don’t think there’s any question we’ve got a lot of confidence in Roydell,” the Tide coach said. “He’s played well when he’s had the opportunity to play. He’s got some extensive playing time in the game BRob missed against Southern Miss. We’re very confident in him.”