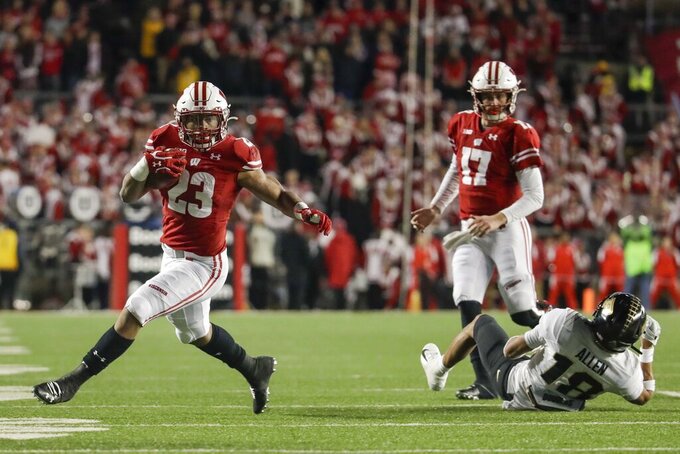 — Kedon Slovis, Southern California, passed for a school-record 515 yards and four TDs in the Trojans’ 52-35 victory over UCLA.

— J.K. Dobbins, Ohio State, rushed for 157 yards and two touchdowns and the No. 2 Buckeyes locked up the Big Ten East, surviving their first real test of the season with a 28-17 victory over No. 9 Penn State.

— Shea Patterson, Michigan, threw five TD passes to lead the No. 12 Wolverines to a 39-14 blowout at Indiana.

— Mason Petrino, Idaho, threw for a career-high 491 yards and tied the school record with six TD passes in a 60-53 win over Northern Arizona.

— Antoine Custer Jr., Eastern Washington, rushed for a career-high 218 yards and two TDs in a 53-46 win over Portland State.

— Micale Cunningham, Louisville, accounted for six TDs, including a 14-yard pass with 1:24 remaining to seal the Cardinals’ 56-34 victory over Syracuse.

— Anthony Gordon, Washington State, went 50 of 70 for 606 yards and six touchdowns in leading the Cougars to a 54-53 victory over Oregon State. Gordon has 45 TD passes this season, breaking the Pac-12 record.

— Daniel Smith, Villanova, threw four of his five TD passes to Changa Hodge and ran for a sixth score as the Wildcats crushed Delaware 55-33.

— Jolo Binda Jr., San Diego, rushed for 147 yards and tied a school record with four TDs in a 47-28 win over Jacksonville.

— Darrynton Evans, Appalachian State, ran for 154 yards and three second-half TDs as the No. 23 Mountaineers avoided another home upset with a big second half to beat Texas State 35-13.

— Tommy Bryant, Kennesaw State, ran for career highs of 154 yards and four TDs in a 42-14 victory over Gardner-Webb.

Freshman Jayden Daniels completed 22 of 32 passes for 408 yards and three touchdowns and Arizona State intercepted two of Justin Herbert’s passes in the fourth quarter, helping the Sun Devils upset the No. 6 Ducks 31-28.

Arizona State ended Oregon’s CFP hopes and its nine-game winning streak. The Sun Devils snapped a four-game losing streak with their first victory over a top-five team since Oct. 14, 2017, against then No. 5 Washington.

Oregon has clinched the Pac-12 North title and a place in the conference championship game.

After cruising through the first 10 games against teams that didn’t put up much a fight, No. 2 Ohio State found itself in a slugfest with No. 9 Penn State.

The Buckeyes responded, winning with defense.

Justin Hillard intercepted Penn State backup Will Levis’ pass and the Buckeyes stopped the Nittany Lions on fourth down on two late drives to seal a 28-17 victory and lock up the Big Ten East title.

Ohio State held on after Penn State took advantage of two second-half turnovers to climb back in the game after trailing 21-0. This was a far different scenario for Ohio State, which hadn’t yet had to play hard into the second half.

Yale and Harvard students poured out of the stands together at halftime in a climate change protest that delayed the 136th edition of The Game for about an hour.

Kurt Rawlings threw two touchdown passes in the final 88 seconds of regulation to rally Yale from a 17-point fourth-quarter deficit and beat Harvard 50-43 in two overtimes, one of the strangest editions of The Game in its 144 years of history.

Following a halftime sit-in by a couple hundred protesters who occupied midfield for about an hour before being peacefully escorted off by police, the Bulldogs celebrated a conference title in darkness 15 minutes after sunset in the unlit, 105-year-old Yale Bowl.

24_Straight wins by Michigan in its series with Indiana.

26_Touchdown passes by No. 11 Minnesota’s Tanner Morgan to set a school record.