STAT WATCH: Illini RB off and running toward another 1,000 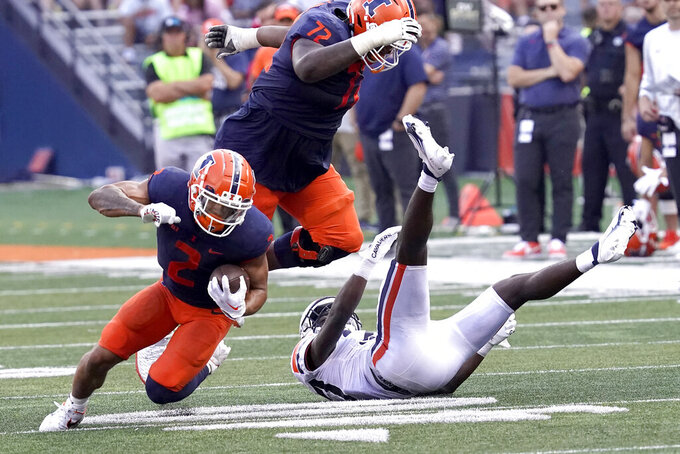 Illinois's Chase Brown is well on his way to a second straight 1,000-yard rushing season.

Brown has 504 yards through three games and leads the nation with 168 per game after going for 146 against Virginia on Saturday. It was his fourth straight 100-yard game since last season, when he averaged 100.5 over his 10 games.

Tulsa's Davis Brin is the leading passer at 391 yards per game, just ahead of Kyle Vantrease's average of 388 for Georgia Southern.

Old Dominion's Ali Jennings III is the top receiver at 161 yards per game.

Kansas, which ranked 111th in scoring last year, leads the nation at 55.5 points per game after hanging 56 on Tennessee Tech and 55 on West Virginia.

Defending national champion Georgia has allowed one field goal through two games and is first in scoring defense at 1.5 points per game. The Bulldogs led the nation last year at 10.2 points per game.

De’Von Fox of Temple blocked three punts against Lafayette, and the Owls converted them into two touchdowns and a safety in a 30-14 win.

The three blocks were the most by a player since at least 2009. NCAA records prior to that season were unavailable.

20 IS THE MAGIC NUMBER

After allowing Georgia 439 passing yards in its opener, Oregon held FCS Eastern Washington to 87 in its 70-14 win.

It was the first time the Ducks had allowed fewer than 100 yards through the air since a win at Wyoming in 2017.

THE GUY CAN RUN AND CATCH

Before Saturday, Hull had never had more than six catches in a game or more than 87 receiving yards.

He was the first Northwestern player to go over 200 receiving yards since receiver Flynn Nagel had 220 against Nebraska in 2018.

Colorado State quarterback Clay Millen already has been sacked 16 times, including nine times against Middle Tennessee on Saturday. His sack rate is 24.2%, worst in the country, according to TeamRankings.com.

The Rams allowed a total of 28 sacks in 12 games last season but have four new offensive line starters this year.