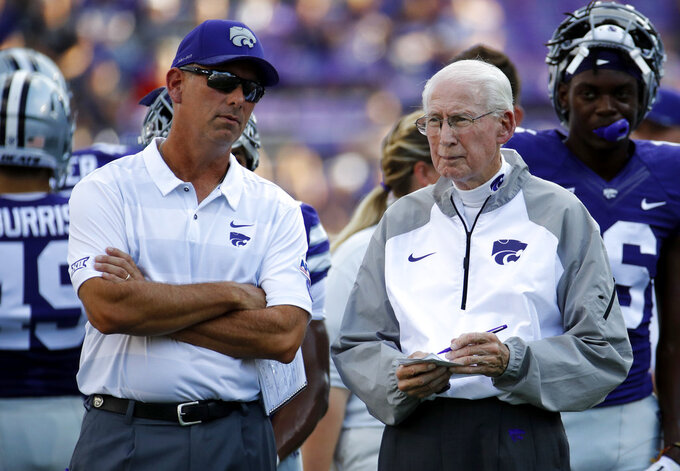 FILE - In this Sept. 1, 2018, file photo, Kansas State head coach Bill Snyder talks with his son and special teams coordinator Sean Snyder before an NCAA college football game against the South Dakota, in Manhattan, Kan. Snyder said again this week that he will evaluate after the season whether he will return next year, but there has been growing unrest in the program. Many believe that Snyder, who prefers that his son and special teams coordinator Sean eventually replaces him, will retire after this year. The question then becomes whether Snyder will get his wish.(AP Photo/Charlie Riedel, File) 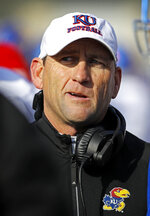 David Beaty has already been replaced at Kansas as he gets ready to coach his final game with the Jayhawks.

Former Texas Tech quarterback Kliff Kingsbury is again on the hot seat as coach of his alma mater. There is even uneasiness around 79-year-old Bill Snyder, who first got to Kansas State about three decades ago and has twice resurrected the Wildcats program.

But there still is a lot of stability among Big 12 coaches going into the final weekend of the regular season:

The Bears can get bowl eligible with a win over Texas Tech. Rhule took on quite a task in the wake of Baylor's sexual assault scandal . He was given a seven-year contract and has built a solid foundation in Waco. Still with a young roster, including sophomore quarterback Charlie Brewer, the Bears have gone from 1-11 in Rhule's debut to five wins.

The question isn't whether Campbell will draw interest from other teams — even in the NFL. The question is whether Campbell wants to stay in Ames. Iowa State will have its best-ever Big 12 finish if it beats Kansas State . Campbell agreed to a new six-year contract after last season. Iowa State also gave raises to his staff and is about to start on enhancements to its football facilities and stadium.

Kansas State has to win at Iowa State to avoid missing a bowl game for the first time since 2009, the first season of Snyder's second tenure in the Manhattan. Snyder said again this week that he will evaluate after the season whether he will return next year, but there has been growing unrest in the program. Many believe that Snyder, who prefers that his son and special teams coordinator, Sean, eventually replaces him, will retire after this year. The question then becomes whether Snyder will get his wish.

The Les Miles era begins after the Jayhawks host Texas in Beaty's finale. The former LSU coach, who reached two BCS title games and won one of them, was hired on Sunday to turn around the downtrodden program wrapping up its 10th consecutive losing season. Beaty made some strides even if the win-loss record doesn't show it. He inherited a disaster from Charlie Weis and improved the talent, increased scholarship numbers and will ultimately leave the program in much better shape than he received it.

The 35-year-old Riley, who succeeded the suddenly-retired Bob Stoops in the summer of 2017, can probably stay at Oklahoma as long as he wants. He got a raise last year after OU's third consecutive Big 12 title. When the Cleveland Browns' job opened, Riley's name was brought up so frequently that he publicly said he wasn't interested in making the jump to the NFL — at least for now.

Gundy will fall short of a fourth consecutive 10-win season, but got decent results out of a rebuilding year at his alma mater after replacing a record-setting quarterback with a fifth-year senior who became a first-time starter. The Cowboys beat Big 12 title contenders West Virginia and Texas, and lost 48-47 to rival Oklahoma after missing a 2-point conversion with a minute left.

TCU has to beat Oklahoma State at home to make a bowl for the 16th time in Patterson's 18 seasons. The Horned Frogs have only three losing seasons under Patterson, and rebounded the following year with at least 10 wins each time. After going to the Big 12 championship game last year, TCU has been decimated by injuries; a fifth-year quarterback is set for his first career start in the regular season finale.

With sophomore quarterback Sam Ehlinger, the Longhorns are a win over Kansas away from playing for their first Big 12 championship since 2009. Texas, whose national title 13 years ago is still the most recent one for the Big 12, was coming off three consecutive losing seasons for the first time since 1930s when Herman took over.

Kingsbury's job was likely saved by winning the regular season finale at Texas last season. While the Red Raiders are clearly a better team, they are 19-34 in Big 12 games under Kingsbury. They are 28-39 overall since starting 7-0 in his debut 2013 season. True freshman quarterback Alan Bowman was the nation's top passer before a partially deflated lung that has sidelined him twice. He missed last week's 21-6 loss at Kansas State when Tech had 181 total yards, its fewest since 2010.

The Mountaineers will play for the Big 12 title if they can beat No. 6 Oklahoma at home, and need two more wins for Holgorsen's third 10-win season. WVU was 10-3 with an Orange Bowl win over Clemson in his first season in 2011 before going 26-25 in the team's first four years in the Big 12. Holgorsen has built a reputation of landing quality transfers, including quarterback Will Grier.